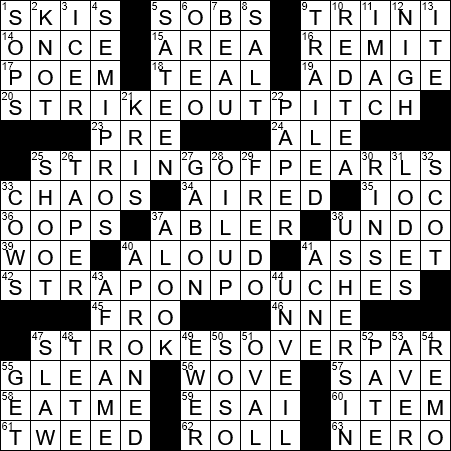 Today’s Theme (according to Bill): Strops

Trini Lopez is a noted singer and guitarist from Dallas, Texas. He is perhaps best known for his international hit “If I Had a Hammer” from 1963, as well as “Lemon Tree” from 1965.

“If I Had a Hammer” is a song written in 1949 by Pete Seeger and Lee Hays. The song has been released by many artists, but my guess would be that the most famous recordings are by Peter, Paul and Mary in 1962, and by Trini Lopez in 1963.

“NYPD Blue” is a police drama that was originally aired in 1993, and ran until 2005. Stars of the show are Dennis Franz, David Caruso, Jimmy Smits and Rick Schroder. The show created a bit of a fuss back in the nineties, as it featured a relatively large amount of nudity for broadcast television.

Sateen is a cotton fabric. It has a weave that is “four over, one under”, meaning that most of the threads come to the surface to give it a softer feel.

If you take a close look at the embossed design on the front and back of an Oreo cookie, you’ll spot the main elements of the Nabisco logo. Those elements are an oval with a cross on top, a cross with two bars. Usually the company name “Nabisco” is inside the oval, but for the cookie it’s the brand name “Oreo”. The current embossed design was introduced 1952.

Red tea is made from the leaves of the South African Rooibos plant.

The iMac is a desktop computer platform that Apple introduced in 1998. One of the main features of the iMac is an “all-in-one” design, with the computer console and monitor integrated. The iMac also came in a range of colors, that Apple marketed as “flavors”, such strawberry, blueberry and lime.

Singer Kris Kristofferson was born in Brownsville, Texas and was the son of a USAF Major General. Indeed, Kristofferson’s paternal grandfather was also a military officer, but in the Swedish Army. Kristofferson himself went into the US Army and served in West Germany, achieving the rank of Captain.

25. Slap the puck toward the goal : SHOOT

Fredo Corleone is a middle son in the Corleone family that features in Mario Puzo’s “The Godfather”. He was considered the weak son, and was reduced to the role of “gopher”. Fredo was with his father when Don Corleone was shot, and although he tried to retaliate as the shooting took place, he dropped his gun. On the screen, Fredo was played by Italian-American actor John Cazale.

The wonderful avocado comes from a tree that is native to Mexico and Central America. The avocado fruit is sometime called an avocado pear, because of its shape, even though it is not related to the pear at all. The fruit might also be referred to as an alligator pear, due to the roughness of the green skin of some avocado cultivars.

Pâté is a rich spreadable paste made up of a mixture of ground meat and fat, to which various vegetables, herbs and spices may be added. The most famous version of the paste is pâté de foie gras, which is made from the fattened livers of geese (“foie gras” means “fat liver” in French).