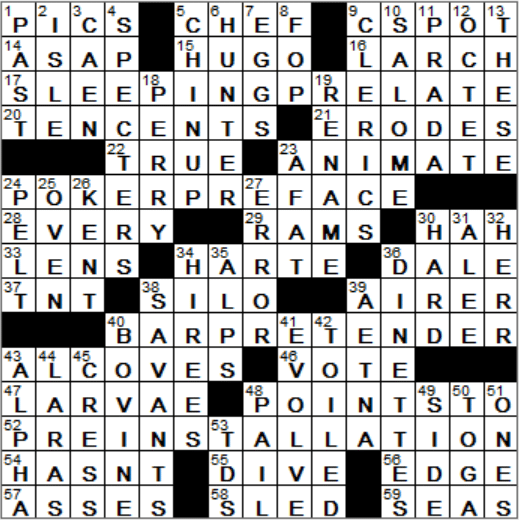 A prelate is a high-ranking clergy member. “Prelate” comes from the Latin “praelatus” meaning “to set above”, so a prelate is one who is set above others.

Someone described as veracious is truthful, from the Latin “verus” meaning “true”.

Poison is a glam rock band that formed in Mechanicsburg, Pennsylvania in 1980. Poison’s biggest hit is 1988’s “Every Rose Has Its Thorn”.

Bret Harte was a storyteller noted for his tales of the American West, even though he himself was from back East, born in Albany, New York. One work attributed to him is “Ah Sin”, a disastrously unsuccessful play written by Bret Harte and Mark Twain. The two writers didn’t get on at all well during the writing process, and when the play was produced for the stage it was very poorly received. Nevertheless, Twain suggested a further collaboration with Harte, and Harte downright refused!

TNT stands for Turner Network Television. The TNT cable channel made a big splash in the eighties when it started to broadcast old MGM movies that had been “colorized”, not something that was a big hit with the public. In recent years, the TNT programming lineup is touted with the tagline “We Know Drama”, and includes shows like “Judging Amy”, “ER” and “Cold Case”.

“Good Behavior” is a TV drama based on a series of novellas of the same name by Blake Crouch. Star of the show is English actress Michelle Dockery, who is best known for playing Lady Mary Crawley on the period drama “Downton Abbey”.

18. Matthew who led a 19th-century expedition to Japan : PERRY

Commodore Matthew C. Perry led a four-ship squadron of navy vessels into Tokyo Bay (then it was called “Edo Bay”) in 1853. Perry’s mission was to re-establish trade relations with Japan at a time when the country was governed by isolationists. Even though Perry brought with him gifts, to signal good will, he also gave a show of strength to indicate the US was willing to force the issue. The resulting Treaty of Kanagawa was signed the following year.

Kent is a county in the southeast of England. Kent is a little unusual in that it shares a “land” border with France. That border nominally exists halfway through the Channel Tunnel, one end of which comes to surface in the Kent port of Folkestone.

Canterbury is a city in the southeast of England, in the county of Kent. Canterbury is famous for Canterbury Cathedral where Thomas Becket was murdered in 1170, making it a pilgrimage destination for Christians. It was one of these pilgrimages that was the inspiration for Geoffrey Chaucer’s “The Canterbury Tales” written in the 14th century.

A “savant” is a learned person. The term “savant” can also be short for “idiot savant”, the outdated name for someone with a mental disability but who has above-normal capabilities in perhaps calculation or musical expression.

In Ancient Rome the classical attire known as a toga (plural “togae” or “togas”) was usually worn over a tunic. The tunic was made from linen, and the toga itself was a piece of cloth about twenty feet long made from wool. The toga could only be worn by men, and only if those men were Roman citizens. The female equivalent of the toga was called a “stola”.