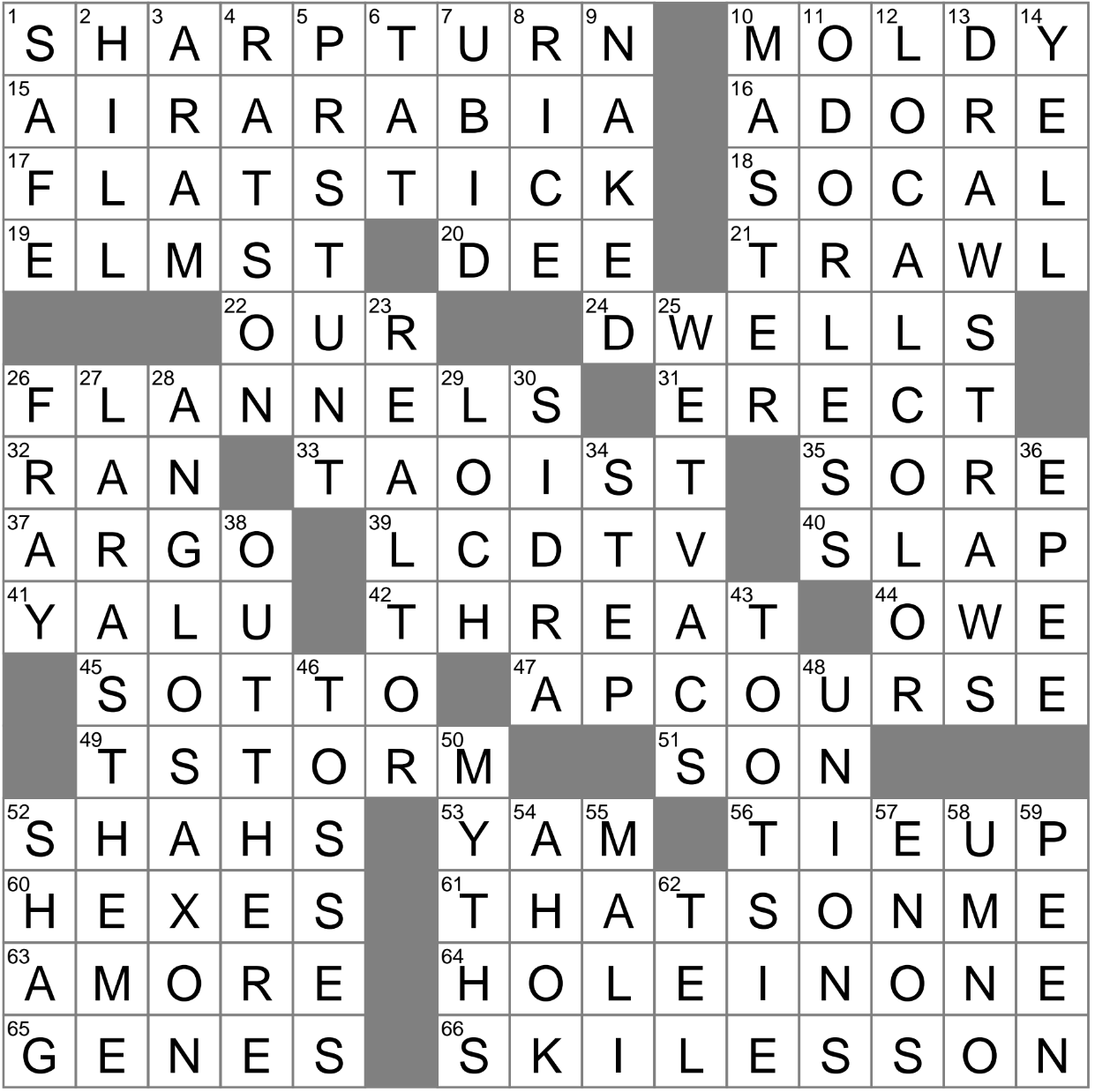 Air Arabia is a budget airline founded in 2003 that is based in Sharjah in the United Arab Emirates.

The Colorado Desert is in California (not Colorado), and is a subdivision of the larger Sonoran Desert. It is located in Colorado River Valley, and is named for the waterway.

Ruby Dee was an actress and civil rights activist. Her big break early in her career was a role in “The Jackie Robinson Story” from 1950, playing Robinson’s sweetheart and wife. She is perhaps best remembered for co-starring in “A Raisin in the Sun” alongside Sidney Poitier, in “Do the Right Thing” alongside her husband Ossie Davis, and in “American Gangster” in which she played Denzel Washington’s mother.

“A Raisin in the Sun” is a 1961 film starring Sidney Poitier that is based on a 1959 play of the same name by Lorraine Hansberry. Both film and play follow the lives of an African-American family from Chicago as they struggle with the decision about what to do with an insurance payout following the death of the family’s patriarch.

The method of fishing known as trawling involves the pulling of a net through the water behind a boat (or boats). The trawling net is known as a trawl.

Flannel is a fabric originally woven using worsted wool, and nowadays mainly using regular wool, cotton or a synthetic fiber. The softness of flannel makes it ideal for blankets, bed sheets and sleepwear.

The White Cloud Temple is an abbey in Beijing that was founded in the 14th century. It is used today as the seat of the Chinese Taoist Association, and is referred to as the First Temple under Heaven.

37 Best Picture winner based on the memoir “The Master of Disguise” : ARGO

A large section of the border between China and North Korea runs down the center of the Yalu River. Yalu is the Chinese name for the river, whereas it is known as the Amnok in Korean. The valley through which the western part of the river flows was the site of many, many dogfights during the Korean War, and was famously known as “MiG Alley”.

The last Shah of Iran was Mohammad Reza Shah Pahlavi, who was overthrown in the revolution led by Ayatollah Khomeini in 1979. The post-revolution government sought the extradition of the Shah back to Iran while he was in the United States seeking medical care (he had cancer). His prolonged stay in the United States, recovering from surgery, caused some unrest back in Iran and resentment towards the United States. Some say that this resentment precipitated the storming of the US Embassy in Tehran and the resulting hostage crisis.

“My Name is Aram” is a collection of tales by William Saroyan. All of the short stories are about a boy of Armenian descent growing up in Fresno, California.

5 Carlsberg’s “Probably not the best beer in the world” campaign, for one : PR STUNT

Carlsberg beer is Danish and has a Royal Warrant from the Danish royal court, meaning that Carlsberg is an official beer of the court. As such, Carlsberg is often referred to in Denmark as “Hof” meaning “court”.

6 Half an even exchange : TAT

uBid.com is an online auction site that was launched in 1997. uBid is headquartered in Chicago, Illinois.

8 Hall of Famer who holds the record for most career touchdown receptions : RICE

Helium is the chemical element with atomic number 2 and the element symbol “He”. Helium is a gas, and lighter than air. It is the second-most abundant element in the universe (after hydrogen). Helium was first detected in 1868 as an unknown yellow spectral line during a solar eclipse. As such, the gas was named for “Helios”, the Greek god of the Sun.

23 Person with lots to offer : REALTOR

“Real estate agent” is a general, generic term. “Realtor” is the name given to a member of the trade association known as the National Association of Realtors (NAR). The NAR has gone so far as to trademark the term “Realtor” in the US.

Singer Connie Francis was at the height of her success in the 1950s and 1960s, and was the first female artist to get the number-one spot on the Billboard Hot 100. She suffered through at least two tragic incidents in her life. She was raped in 1974, in a motel she was using while performing at a New York music fair. She was very close to her brother George, and he was murdered by Mafia hitmen in 1981. Despite it all, Connie Francis earned recognition as the “First Lady of Rock & Roll” in some circles, and was described by fellow singer Gloria Estefan as “the first female pop star worldwide”.

The sitcom “Seinfeld” had a rocky start. A pilot episode titled “The Seinfeld Chronicles”, filmed in 1989, was received very poorly by test audiences. NBC aired the pilot later that year, garnering some more positive feedback from TV critics, but not enough for the network to pick up the show. It took a year of internal wrangling to convince NBC to place an order for a first season. Even then, the order for the new series was for only four episodes, the smallest sitcom order in the history of television. The show was renamed to “Seinfeld”, the pilot and four episodes were aired in 1990, and audiences lapped it up.

A shag cut is a layered hairstyle. Actress Meg Ryan famously sported a shag cut for many years, as did fellow actress Farrah Fawcett.

Mireille Enos is an actress from Kansas City. She is perhaps best known for her TV work, playing Sarah Linden on “The Killing” and for playing twins Kathy and JoDean Marquart on “Big Love”. Enos is married to actor Alan Ruck, who I mainly remember playing Cameron Frye in the great movie “Ferris Bueller’s Day Off”.

“The Killing” is an excellent crime series that aired for four seasons starting in 2011. It stars Mireille Linden as a Seattle homicide detective. The US-produced show is based on a Danish TV series titled “The Crime” in English.