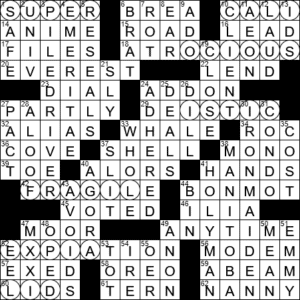 The sets of circled letters in the grid can be arranged into the nonsense word “Supercalifragilisticexpialidocious”, which is the title of a song sung by SUPERNANNY Mary Poppins in the Disney movie “Mary Poppins”:

A tar pit is an unusual geological feature created by leakage of bitumen from below ground to the earth’s surface creating a pool of natural asphalt. One of the most famous of these occurrences is the La Brea Tar Pits in Los Angeles.

Robert Frost had a poem published in 1916 in which he describes the road he took in the last lines:

I took the one less traveled by,
And that has made all the difference.

Because of these last lines, the poem is often assumed to be titled “The Road Less Traveled”. In fact, the poem’s correct name is “The Road Not Taken”. Quite interesting …

Mount Everest was named by the Royal Geographical Society in 1865. The peak is named for Welsh surveyor George Everest, who had served as Surveyor General of India from 1830 through 1843. Everest actually objected initially to the use of his name, given that he had nothing to do with the peak’s discovery, and given that he believed “Everest” was difficult to write and to pronounce in Hindi.

Mount Everest was first summited in 1953 by New Zealander Edmund Hillary and Nepalese-Sherpa Tenzing Norgay. Hillary and Norgay were part of an expedition from which two pairs of climbers were selected to make a summit attempt. The first pair were Tom Bourdillon and Charles Evans, and they came within 330 feet of their goal but had to turn back. The expedition sent up the second pair two days later, and history was made on 29 May 1953.

Benjamin Franklin came from a large family. He was his father’s fifteenth child (Josiah Franklin had seventeen children in all, with two wives). Benjamin was born in Boston in 1706. He had very little schooling, heading out to work for his father when he was ten years old. He became an apprentice printer to his older brother at the age of twelve. Benjamin did quite well with that limited education …

The mythical roc is a huge bird of prey, one reputedly able to carry off and eat elephants. The roc was said to come from the Indian subcontinent. The supposed existence of the roc was promulgated by Marco Polo in the accounts that he published about his travels through Asia.

Molluscs (also “mollusks”) are invertebrate (no-backbone) animals that comprise about a quarter of all known marine organisms. Examples are squid, cuttlefish and octopodes.

“The Highwayman” is a 1906 romantic ballad poem penned by English poet Alfred Noyes. The first verse is:

To expiate is to make amends for something. The term “expiate” comes from the Latin verb “expiare”, which has the same meaning.

59 Perpendicular to the keel : ABEAM

The idiomatic phrase “close, but no cigar” means “nice try, but not good enough”. There is a suggestion that this expression originated in the mid-20th century with fairground stalls, at which cigars were routinely given out as prizes.

“Somewhere in Time” is a 1986 studio album released by heavy metal band Iron Maiden. The band followed up the album with a tour that was inventively named “Somewhere on Tour”.

38 One of Canada’s Prairie Provinces : MANITOBA

Manitoba is the Canadian province that borders the US states of North Dakota and Minnesota. Even though Manitoba has an area of over 250,000 square miles, 60% of its population resides in the province’s capital city of Winnipeg.

In early Greece, an agora was a place of assembly. The assemblies held there were often quite formal, perhaps for the reading of a proclamation. Later in Greek history, things became less formal as the agora evolved into a marketplace. Our contemporary word “agoraphobia” comes from these agorae, in the sense that an agoraphobe has a fear of open spaces, a fear of “public meeting places”.

The so-called “waste hierarchy” can be restated as the three Rs: Reduce, Reuse, Recycle. The preferences are in order:

47 XLV years before the Battle of Hastings : MXXI

The Battle of Hastings took place in the South East of England in 1066. The battle took place between the native Anglo-Saxons led by King Harold Godwinson, and the Norman-French led by Duke William II of Normandy. William emerged victorious, earning him the moniker William the Conqueror, and the crown of England as William I. That victory launched the Norman conquest of England.

51 Primetime award for which Betty White has received 21 nominations : EMMY

Comic actress Betty White has been at the top of her game for decades. White started her television career with an appearance with high school classmates on a local Los Angeles show back in 1939. Her most famous TV run was co-hosting the Tournament of Roses Parade, a gig she had for nineteen years in the sixties and seventies. Given her long career, White holds a number of records in the world of entertainment. For example, she is the oldest person to host “Saturday Night Live” (at 88) and she is the oldest woman to win a Grammy (at 90).

Guinness is the most popular beer sold in Ireland. The beer is a stout and has that famous creamy white head, a result of mixing the beer with nitrogen as it is poured. You can also buy Guinness that has no nitrogen, which is sold in bottles bearing the name Guinness Export. This carbonated version of the beer has a very different taste, and is my personal favorite …