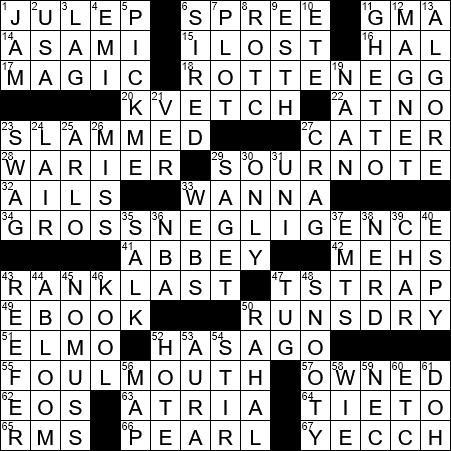 Each of today’s themed answers starts with an observation that might elicit the exclamation “YECCH!”

“David Copperfield” is the stage name used by illusionist David Kotkin. Copperfield is incredibly successful as a magician. He has grossed over $3 billion in ticket sales in his career, which is more than any other solo entertainer in any field. Copperfield actually owns his own chain of islands in the Bahamas.

The correct name for the Gothic church we know as Westminster Abbey is the Collegiate Church of St. Peter at Westminster. The Abbey is a favored location for coronations and royal weddings and burials. The last royal wedding in the Abbey was the marriage between Prince William and Kate Middleton in April 2011.

The toy called Tickle Me Elmo was a sensational fad in the late nineties, with stores raising prices dramatically above the recommended retail price to take advantage of demand. Reportedly, prices as high as $1500 were paid at the height of the craze. The toy’s manufacturer, Tyco, originally planned to market the “tickle” toy as Tickle Me Tasmanian Devil (after the “Looney Tunes” character), but then went with “Elmo” after they bought the rights to use “Sesame Street” names.

In Greek mythology, Eos was the goddess of the dawn who lived at the edge of the ocean. Eos would wake each morning to welcome her brother Helios the sun. The Roman equivalent of Eos was Aurora.

67. Reaction to the starts of the five longest puzzle answers : YECCH!

It is believed that the Book of Job is the oldest book in the Bible.

When Elvis Presley recorded his hit “In the Ghetto” in 1969, it was considered somewhat controversial. It tells the story of a young boy from a Chicago ghetto who gets into fights, buys a gun, steals a car and is eventually shot and killed. Compared to today’s gangster rap lyrics, I’d say pretty that’s pretty mild stuff …

The Climate Reality Project is an organization founded by Al Gore in 2011. Perhaps adding to the gravitas of the group, the Project’s board of directors includes Theodore Roosevelt IV, great grandson of president Theodore Roosevelt.

The Muppet named Miss Piggy has a pretentious air, and so refers to herself as “moi”. In 1998, Miss Piggy even released her own perfume called “Moi”.

Jonas Salk was an American medical researcher, famous for developing the first safe polio vaccine. In the fifties, especially after the 1952 epidemic, polio was the biggest health fear in the US because it killed thousands, left even more with disabilities and most of the victims were children. The situation was dire and the authorities immediately quarantined the family of any polio victim, and that quarantine was so strict that in many cases the families were not even permitted to attend the funeral of a family member who died from the disease.

Kevin Durant is a professional basketball player who started his career in the NBA with the Seattle Supersonics, and relocated with the team to Oklahoma City where they became the Thunder. You might come across Durant on the big screen as well, as he starred in the children’s film “Thunderstruck” in 2012.

A reefer jacket is a nautical garment. It is a type of pea jacket that is worn only by officers and chief petty officers as it has gold buttons and sometimes epaulettes.

A pea coat (also “pea jacket”) is a heavy woolen outer jacket originally associated with sailors. Nowadays anyone wears them (they’re very comfortable and warm). The female equivalent of a pea coat is often called a Jackie O jacket, after Jackie Onassis.

Kools cigarettes were introduced in 1933, and are still around today. The brand is marketed as being “smooth”, as the ingredient menthol numbs the mouth and dulls the taste of the tobacco.

Snoot is a variant of “snout” and is a word that originated in Scotland. The idea is that someone who is “snooty”, or snouty, tends to look down his or her nose at the rest of the world.

The term “highfalutin” dates back to the mid-1800s. some suggest that it may be a mutation from “high flying”, as “highfalutin” means “haughty” or “pretentious”.

On a restaurant menu, items that are “à la carte” are priced and ordered separately. A menu marked “table d’hôte” (also called “prix fixe”) is a fixed-price menu with limited choice. “Table d’hôte” translates as “table of the host”.

I am not a huge fan of reality television, but I do watch “The Amazing Race” (usually while writing posts for this blog on my laptop!). I love to travel, and enjoy seeing the teams traverse the globe. The show’s host is Phil Keoghan. From his accent, I always thought that Keoghan was from the Boston area. He’s actually from New Zealand! Shows you how much I know about American accents …