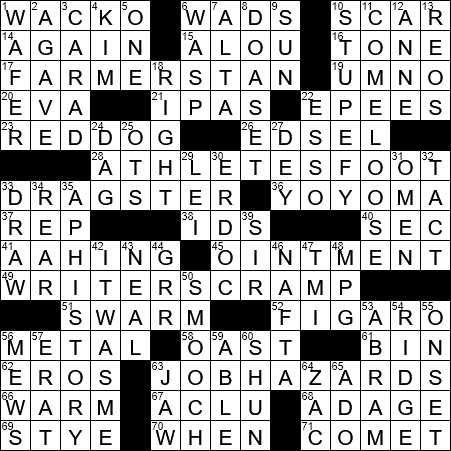 Wait for the beep …

17 Result of overexposure in the field? : FARMER’S TAN

A “farmer’s tan” or “golfer’s tan” is one that affects only the arms and neck, and is the result of wearing a sleeveless shirt.

23 Blitz by a linebacker : RED DOG

In football, a blitz (also “red dog”) is a maneuver by players in the line of scrimmage designed to quickly overwhelm the opposing quarterback.

28 Result of carelessness in a locker room? : ATHLETE’S FOOT

The skin condition known as tinea is more usually referred to as ringworm. Tinea pedis is commonly known as athlete’s foot.

“Sec” is a term used in France for “dry”

Figaro is the title character in at least two operas: “The Barber of Seville” (“Il barbiere di Siviglia”) by Rossini, and “The Marriage of Figaro” (“Le nozze di Figaro”) by Mozart. The two storylines are based on plays by Pierre Beaumarchais, with one basically being a sequel to the other.

A sampler is a piece of needlework that often includes letters and words. Also, samplers are often used to demonstrate skills used in cross-stitching and embroidery.

3 Spot for a Mercedes : CAR AD

Emil Jellinek was a European automobile entrepreneur whose claim to fame is that he commissioned the Mercedes 35 HP, a design that’s cited as the first modern car. Prior to 1901’s 35 HP, cars were really modified stagecoaches. Jellinek chose the name “Mercedes” in honor of his daughter Adriana, whose nickname was “Mercédès”.

Kim Kardashian is a socialite and television personality. She was introduced into society by her friend, Paris Hilton. Kardashian’s name first hit the headlines when a homemade sex tape, made by her and singer Ray J, was leaked.

Our sun is a sphere of hot plasma that forms the center of our solar system. The Sun’s mass has two main components, with almost three quarters made up by hydrogen, and a quarter by helium. The continual nuclear fusion reaction in the Sun’s core converts hydrogen into helium, and generates a lot of energy. We should all be pretty grateful to the Sun for generating that energy …

Anne Tyler is a novelist from Minneapolis, Minnesota. Most of Tyler’s novels are set in Baltimore, Maryland, where she now resides. Tyler’s most famous title has to be “The Accidental Tourist”, which was adapted into a 1988 film starring William Hurt, Kathleen Turner and Geena Davis. Tyler might be considered somewhat of a recluse in her professional life as she rarely makes personal appearances to promote her books.

Actress Susan Dey first appeared on “The Partridge Family” when she was 17-years-old when she had no acting experience. Years later, Dey won a Golden Globe for playing the leading role of Grace Van Owen in “L.A. Law”.

What’s known as “May Day” around the world is also called “Lei Day” in Hawaii. Lei Day started in the twenties and is a celebration of native Hawaiian culture.

“Fanny” is a slang term for the buttocks, rump. You have to be careful using the slang term “fanny” if traveling in Britain and Ireland, because over there it has a much ruder meaning …

A culprit is a person guilty of a crime, or is perhaps the source of a problem. The term “culprit” comes from Anglo-French with an interesting etymology. Back in the day, a prosecutor opening a trial would use the words “Culpable: prest (d’averrer nostre bille)” meaning “guilty, ready (to prove our case”, which was abbreviated to “cul. prit”. The abbreviated French was mistakenly applied in English as a term to describe the defendant, the “culprit”.

“Cryptonomicon” is a 1999 novel by Neal Stephenson. The storyline is bifurcated into two time periods. The first involves cryptology experts stationed at the Allied code-breaking center at Bletchley Park in the UK during WWII. The second set of characters are cryptologists in the fictional Sultanate of Kinakuta working in the 1990s. I haven’t read this one, but it sounds like my kind of book …

The North American Free Trade Agreement (NAFTA) is a treaty between Canada, Mexico and the United States. When NAFTA came into force in 1994, it set up the largest free trade zone in the world.

James Abram Garfield, the 20th President, was assassinated in office. He was shot twice, and one bullet could not be found (it was lodged in his spine). Inventor Alexander Graham Bell developed a metal detector in an attempt to locate the bullet, but apparently he was unsuccessful because of interference from the metal bed frame on which the president lay. Garfield died two months after being shot.

“Baywatch” is a 2017 comedy film that is based on the TV series of the same name that famously starred David Hasselhoff. The movie stars Dwayne “The Rock” Johnson.