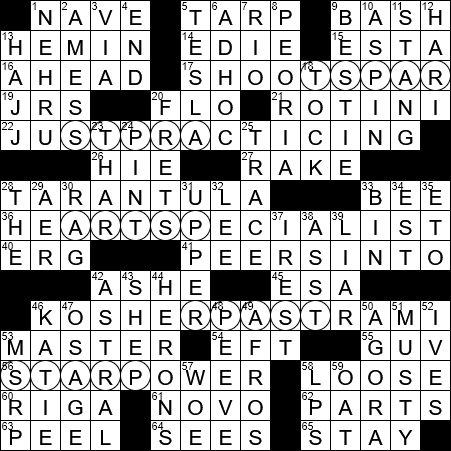 Themed answers each include the letter string “PARTS” arranged in a different order:

Edie Adams was an all-round entertainer. She worked for many years on television with Ernie Kovacs and Jack Paar, marrying Ernie Kovacs in 1954. On the big screen she had a major supporting role in “The Apartment”, and was one of the stars of “It’s a Mad, Mad, Mad, Mad World”.

“De novo” is Latin for “anew”, and is a term that we use in English with the same meaning.

6. Limited in scope, as a committee : AD HOC

Les Aspin was Secretary of Defense in the Clinton administration, although just for a year. He had a turbulent year in office, and during this time oversaw the introduction of the “don’t ask, don’t tell” policy for the military. But it was the loss of US lives in Somalia that brought his year to an end, causing him to resign for personal reasons at the end of 1993.

A US pint is made from 16 fluid ounces, and an imperial pint is 20 fluid ounces. The term “pint” comes into English via Old French, ultimately from the Latin “picta” meaning “painted”. The name arose from a line painted on the side of a beer glass that marked a full measure of ale.

John Lee Hooker was a blues singer and songwriter. One of Hooker’s more memorable compositions is the song “Boom Boom”, which he wrote and recorded himself in 1961. A version of “Boom Boom” performed by Big Head Todd and the Monsters serves as the theme song for the TV drama “NCIS: New Orleans”.

Shep Smith is a television journalist and host with Fox News. Smith has been hosting “Shepard Smith Reporting” on Fox since 2013.

Herons are birds with long legs that inhabit freshwater and coastal locales. Some herons are routinely referred to as egrets, and others as bitterns. Herons look a lot like storks and cranes, but differ in their appearance in flight. Herons fly with their necks retracted in an S-shape, whereas storks and cranes have their necks extended.

Something described as “musty” has as stale or moldy odor. The term derives from an obsolete word “moisty”, as in “moist”.

Lithography is a printing technique that was invented in 1796 as a cheap way to publish theatrical works. In the litho process the image is drawn on a metal plate, although originally it was drawn on a stone (hence the prefix “litho-“). The image is drawn in such a way that some regions of the plate repel ink, and then when paper is applied to the plate, those areas are ink-free. A “lithograph” is a print that is made using the technique, and is often a reproduction of a work of art.