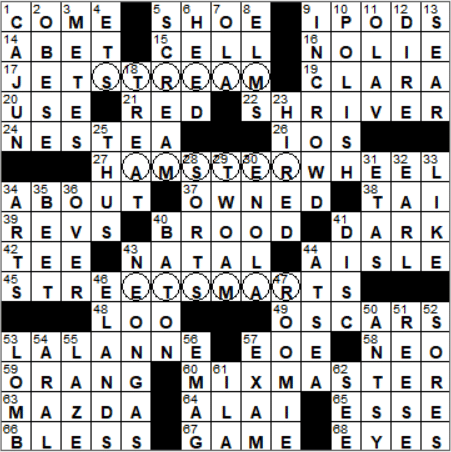 Each of today’s themed answers includes a string of circled letters. Those letters are MASTER MIXED up in order:

Jet streams are narrow air currents high in the atmosphere that move very quickly around the earth. The major jet streams surrounding our planet move in a westerly direction.

Sargent Shriver was the running mate of George McGovern, the Democratic nominee for US President in the 1972 race. Shriver was a member of the Kennedy clan, as he was married to Eunice Kennedy, sister to President John F. Kennedy. Shriver had many roles in public life, including founder of the Peace Corps.

Jack LaLanne was a pioneer in the field of fitness and nutrition and was sometimes called “the godfather of fitness”. LaLanne was also a bodybuilder and actually beat 21-year-old Arnold Schwarzenegger in competition, when LaLanne was 54-years-old …

Orangutans (also “orangs”) are arboreal creatures, in fact the largest arboreal animals known to man. They are native to Indonesia and Malaysia, and live in the rainforests. Like most species in rainforests these days, orangutans are endangered, with only two species surviving. The word “orangutan” is Malay, meaning “man of the forest”.

Sumatra is a very large island in western Indonesia. It is the sixth largest island in the world and home to 22% of the country’s population.

60. Sunbeam brand … and a literal hint to the circled letters : MIXMASTER

Sunbeam is a supplier of electric home appliances that was founded in 1897 as the Chicago Flexible Shaft Company manufacturing horse trimming and sheep shearing machinery. The company diversified, eventually producing in 1921 the Princess Electric Iron, its first household product. Sunbeam’s flagship product for many years was the Mixmaster mechanical mixer that was introduced in 1930.

Arizona and Hawaii are the only two states in the US that do not observe daylight saving time (DST), having opted out when the Uniform Time Act was passed by the US Congress in 1966. Some Native American nations in Arizona observe DST, and some don’t. As a result, times can change back and forth a few times while driving across Arizona during the summer.