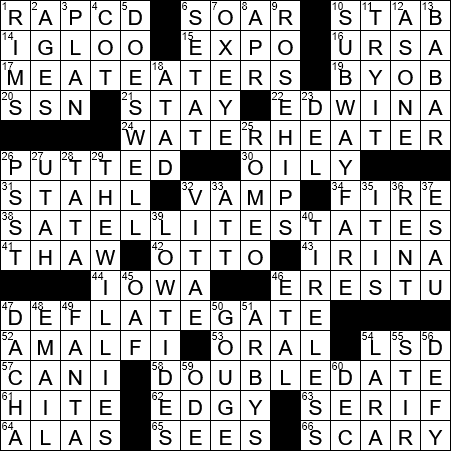 Themed answers each include two instances of the letter string “ATE”:

“National Velvet” is a novel by Enid Bagnold that was first published in 1935. The story centers on Velvet Brown, a 14-year-old girl who rides her own horse to victory in the most celebrated of English horse races, the Grand National steeplechase. A famous film adaptation of the story was released in 1944 starring a young Mickey Rooney and 12-year-old Elizabeth Taylor in the title role. After filming was completed, Taylor was given the horse that she rode as a gift for her birthday.

Lesley Stahl first appeared on “60 Minutes” in 1991. She is married to author “Aaron Latham”. As a journalist, it was Latham who wrote the article that inspired the movie “Urban Cowboy”.

In Greek mythology, Prometheus was one of the Titans. He was said to have created man from clay as well as giving fire to humanity, and hence allowing the human race to prosper.

38. Latvia and Lithuania, once : SATELLITE STATES

We have a big event across Europe every year called the Eurovision Song Contest. Each nation enters one song in competition with each other, and then voters across the whole continent decide on the winner. That’s how ABBA got their big break when they won in 1974 with “Waterloo”. In 1973, Spain’s entry was “Eres tú” (the Spanish for “You Are”) sung by the band Mocedades. “Eres tú” came second in the competition, but should have won in my humble opinion.

Deflategate is the name given to accusations that someone associated with the New England Patriots supplied under-inflated balls for NFL games to give Patriots an advantage in the 2014/2015 NFL playoffs. The NFL suspended Patriots quarterback Tom Brady for four games for his involvement, and fined the Patriots $1 million.

Amalfi, Italy is a coastal town on the Gulf of Salerno located about 30 miles southeast of Naples. The town gives its name to the popular tourist destination known as the Amalfi Coast.

“Nothing but net” is a phrase used in basketball to describe a “clean basket”. A clean basket is a score in which the ball doesn’t touch the backboard or even the rim, and touches only the net.

The fruit of the rose plant is known as the rose hip or rose haw. I remember drinking rose hip syrup when I was a kid …

“Sibilant” is a lovely word that describes a sound of speech, the sound of an “s” or “z”, a hissing sound. The word “sissies”, for example, has three sibilant sounds.

A fit of the willies is a spell of nervousness. The expression is probably a derivative of “the woollies”, a colloquial expression meaning “nervous” that is likely to be a reference to itchiness caused by wool garments.

The American quarter is a little unusual in the world of decimal currency, if you think about it. Most currencies have a “20-cent” coin, which is easier to work with mathematically. The US went for the quarter in deference to the practice of dividing Spanish Milled Dollars into eight wedge-shaped “bits”. That’s also why the quarter is sometimes referred to as “two bits”. State quarters were introduced in 1999, but prior to that the quarter had an eagle on its reverse.

The soft drink named “Fanta” has quite an interesting history. As WWII approached, the Coca-Cola plant in Germany had trouble obtaining the ingredients it needed to continue production of the cola beverage, so the plant manager decided to create a new drink from what was available. The new beverage was built around whey (left over from cheese production) and pomace (left over after juice has been extracted from fruit). The inventor asked his colleagues to use their imagination (“Fantasie” in German) and come up with a name for the drink, so they piped up “Fanta!”

The Arby’s chain of fast food restaurants was founded in 1964 by two brothers, Forrest and Leroy Raffel. The name “Arby’s” is a homonym of “RB’s”, standing for “Raffel Brothers”.

The term “Hanukkah” derives from the Hebrew for “to dedicate”. Hanukkah is a holiday lasting eight days that commemorates the rededication of the Holy Temple of Jerusalem after successful Jewish revolt against the Seleucids in the 2nd-century BCE. The story of Hanukkah includes the miracle of the one-day supply of oil that kept the menorah alight for eight days. In the Gregorian calendar, Hanukkah can start as early as November 28th, or as late as December 27th.