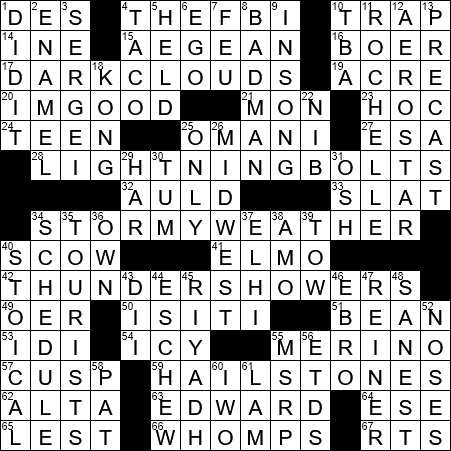 Themed answers are phrases associated with STORMY WEATHER that are often used in a figurative sense, as indicated in the clue:

15 Sea between Greece and Turkey : AEGEAN

24 Many a “Twilight” character : TEEN

Author Stephenie Meyer is best-known for her “Twilight” series of vampire romance novels. The “Twilight” books are aimed at young adults. Meyer also wrote a 2008 adult sci-fi novel called “The Host”, which went straight to the top of the New York Times Best Seller list.

34 Song first sung by Ethel Waters at Harlem’s Cotton Club … and a hint to four other long answers : STORMY WEATHER

“Stormy Weather” is a 1933 song that is most associated with Lena Horne and Billie Holliday. It was first recorded by Ethel Waters, who debuted the song at the Cotton Club in Harlem, New York City. “Stormy Weather” spawned a 1943 movie of the same name in which Lena Horne starred and performed the song.

“Ivy and Bean” is a series of children’s books written by Annie Barrows and illustrated by Sophie Blackall. The title characters are friends, two 7-year-old girls with very different personalities.Ivy is quiet and bookish, and is training to be a witch. Bean is a very boisterous tomboy. The first book in the series is “Ivy and Bean”, published in 2006.

The word “cusp” comes from the Latin “cuspis” meaning “spear, point”. In the world of astrology, a cusp is an imaginary line separating two signs of the zodiac. For example, some whose birthday is between April 16 and April 26 is said to have been born “on the cusp” between the signs Aries and Taurus.

The New York City dialect of English is sometimes referred to as “Brooklynese”. In Brooklynese, we might take “dis”, “dat”, “dese” or “dose” (this, that, these or those).

Iona College is a Roman Catholic school run by Christian Brothers in New Rochelle, New York. The school’s sports teams are called the Iona Gaels, and the team mascot goes by the name Killian.

The Aerostar was the first minivan released by the Ford Motor Company, and was produced from 1986 to 1997.

Zeno of Citium was a Greek philosopher famous for teaching at the Stoa Poikile, the “Painted Porch”, located on the north side of the Ancient Agora of Athens. Because of the location of his classes, his philosophy became known as stoicism (from “stoa”, the word for “porch”). We get our adjective “stoic, stoical”, meaning “indifferent to pleasure or pain”, from the same root.

46 Iberian river to the Mediterranean : EBRO

The multi-talented Carl Reiner is from the Bronx, New York. Reiner was married to singer Estelle Roberts. You might remember Roberts from the film “When Harry Met Sally” that was directed by Carl’s son, Rob Reiner. Estelle was the woman in the deli who said the famous line “ I’ll have what’s she’s having”, on seeing how excited Meg Ryan apparently was with her sandwich.

56 Postings at an airline gate, for short : ETDS