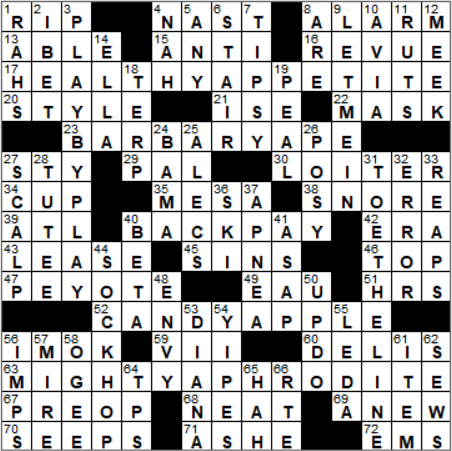 “Vanity Fair” is a pop culture and fashion magazine that was originally published from 1913 to 1936, and revived in 1983.

Strunk & White’s “The Elements of Style” was first published in 1918. “The Elements of Style” is a relatively thin book, when compared to its modern counterpart “The Chicago Manual of Style”. Both books give guidance on the correct use of American English. The Chicago version is one of the most frequently used references on my bookshelf, and a constant reminder of my inadequacies!

The Atlas Mountains are a range stretching across Northern Africa, through Morocco, Algeria and Tunisia. The Mediterranean and Atlantic coasts are on one side of the range, and the Sahara Desert on the other.

SunTrust Park is the baseball stadium that has been home to the Atlanta Braves since 2017. The Braves had been playing in Turner Field since 1997, which was a stadium built for the 1996 Summer Olympic Games.

The peyote is a small spineless cactus that is native to southwestern Texas and Mexico. When ingested, the peyote is known to have a psychoactive effect. One of the psychoactive alkaloids in peyote is mescaline, a recreative drug of choice for the likes of Aldous Huxley and Pablo Picasso.

“Candy apple” is yet another term that I had to learn when came to the US. Candy apples are called “toffee apples” outside of North America.

In Roman numerals, the number VII (7) is considered lucky by many.

“Mighty Aphrodite” is a 1995 Woody Allen romantic comedy starring Mira Sorvino. The film was inspired by George Bernard Shaw’s play “Pygmalion”. I know, the critics loved “Mighty Aphrodite”, but I can’t stand it …

“Ella Enchanted” is a fantasy novel written by Gail Carson Levine, and published in 1997. It is a retelling of the story of Cinderella, with lots of mythical creatures added. A film adaptation was released in 2004, starring Anne Hathaway in the title role.

Carotene is an orange pigment that plants use in the process of photosynthesis. Carotene gives carrots their orange color, and it is carrots that give the pigment its name. “Carota” is the Latin for “carrot”. Carotene is found in nature in two structural forms: alpha-carotene and the more common beta-carotene.

The superhero Wonder Woman first appeared in print in 1941, in a publication from DC Comics. As she was created during WWII, Wonder Woman’s first foes were the axis powers. In the less realistic world her biggest foe was and still is Ares, a “baddie” named for the Greek mythological figure. Wonder Woman had several signature expressions, including “Merciful Minerva!”, “Suffering Sappho!” and “Great Hera!”. She also has several devices that she uses in her quest for justice, e.g. the Lasso of Truth, a pair of indestructible bracelets and a tiara that can be used as a deadly projectile. Wonder Woman uses the name “Diana Prince” when “out of uniform”.