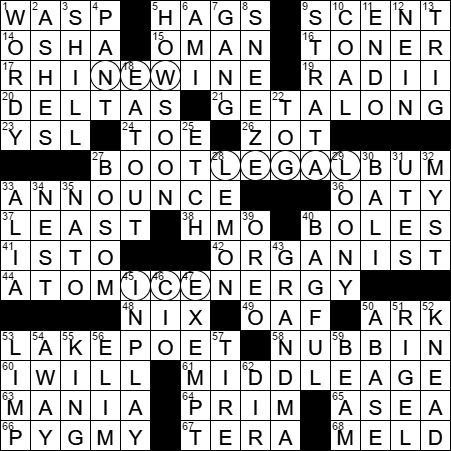 Each of today’s themed answers a hidden word, right in the MIDDLE, that is shown by the circled letters in the grid. That hidden MIDDLE word is a type of AGE:

The majority of German wines are produced in vineyards located along the river Rhine, or along tributaries of the Rhine. Such wines are usually referred to as “Rhine wines”.

“To bootleg” is to make or smuggle alcoholic drinks illegally. The term arose in the late 1800s as slang for the practice of concealing a flask of liquor down the leg of a high boot. The term has been extended to mean the illegal production and sale of just about anything.

A klutz is an awkward individual, and the term comes from Yiddish. The Yiddish word for a clumsy person is “klots”.

The Lake Poets were a group of Romantic poets who lived in the Lake District of northern England in the late 1700s and early 1800s. The three most prominent members of the group were William Wordsworth, Samuel Taylor Coleridge and Robert Southey.

The great English poet William Wordsworth is intrinsically linked with the Lake District in the north of England, where he lived from much of his life. The Lake District is a beautiful part of the country, and I’ve been fortunate enough to visit Dove Cottage in Grasmere a couple of times, where Wordsworth lived with his wife Dorothy …

“I Will Always Love You” is a fabulous song written, and originally recorded, by Dolly Parton. Parton wrote the song on the occasion of her professional breakup with Porter Wagoner, with whom she sang as part of a duo for six years. Famously, Whitney Houston recorded a highly successful rearranged cover version of “I Will Always Love You”, primarily for the soundtrack of “The Bodyguard”. Houston starred in the movie “The Bodyguard” alongside Kevin Costner.

The pygmy hippopotamus and the much larger common hippopotamus are the only two extant species in the family Hippopotamidae. Pygmy hippos are native to West Africa, and are nocturnal beasts. One of the more famous examples of the species was Billy the pygmy hippo, a beast that Harvey Firestone of Firestone Tires fame presented to President Calvin Coolidge for Washington Zoo in 1927. Most pygmy hippos in zoos around the country today are related to Billy.

The verb “tog up”, meaning to dress up, comes from the Latin “toga”, the garment worn in Ancient Rome. “Tog” can be also be used as an informal word for a coat or a cloak. Back in Ireland, togs are what we call swimming shorts.

“Bosm” is an Old English word for breast, which came into English as “bosom” meaning “breast, chest” without any association with either gender. It was only in the late fifties that the meaning narrowed to mean a woman’s breasts”. Terms like “bosom-friend” have been around since the late 16th century, and “bosom buddy” since the 1920s.

Something described as “loony” is insane, crazy. “Loony” is short for “lunatic”, an adjective “lunatic” is now considered offensive. The term arose in the late 1400s, when it meant “affected with periodic insanity”, i.e. insanity attacks brought on by the cycles of the moon. “Lunatic” comes from the Latin “luna” meaning “moon”.

A utility vehicle is often called a “ute” for short. Nowadays one mainly hears about sports utes and crossover utes.

The Partnership for Peace (PfP) program is a NATO initiative that dates back to 1994. The intent of the PfP is to foster trust between NATO and the former Soviet Union.

21. Coexist peacefully : GET ALONG

42. Musician at ballparks and churches : ORGANIST

61. Period after young adulthood … and a hint to each set of circles : MIDDLE AGE

56. Kind of tournament round, briefly : ELIM