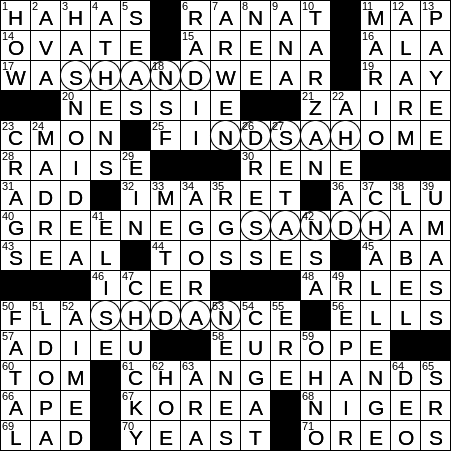 Themed answers include the letter string “HANDS”, although the order of the letters in the string has been CHANGED around:

58. Where most Russians live : EUROPE

Tom Cruise’s real name is Tom Cruise Mapother IV. Cruise was born in Syracuse, New York. That’s one of my favorite cities in the US, because it’s where I met my lovely wife-to-be …

Ava DuVernay is a filmmaker who became the first African-American woman to win the Best Director Prize at the Sundance Film Festival, a feat she achieved in 2012 for her feature film “Middle of Nowhere”. “Middle of Nowhere” tells the story of a woman who drops out of medical school to focus on husband when he is sentenced to 8 years in prison. DuVernay also directed the 2014 film “Selma” about the 1965 voting rights marches from Selma to Montgomery, Alabama.

Arwen Undómiel is a character in J. R. R. Tolkien’s “The Lord of the Rings”. In the movie adaptations by Peter Jackson, Arwen is played by actress Liv Tyler.

Tarzan is the title character in the series of books created by Edgar Rice Burroughs. The line “Me Tarzan, you Jane” never appeared in the books, and indeed doesn’t even figure in the movies. Apparently Johnny Weissmuller (who played Tarzan in the thirties and forties) saw Maureen O’Sullivan (“Jane”, to Weissmuller’s “Tarzan”) struggling with a suitcase in the parking lot during filming. He grabbed the bag from her, jokingly saying “Me Tarzan, you Jane”, and people have been quoting those words ever since.

Setae (singular “seta”) are bristle-like structures in both plants and animals. “Seta” is the Latin word for “bristle”.

“Für Elise” is a beautiful piece of solo piano music by Beethoven that is also known as “Bagatelle in A Minor”. “Für Elise” means simply “For Elise”, but sadly no one knows for sure the identity of the mysterious dedicatee.

“The Puzzle Palace” is a 1982 book by James Bamford book that deals with the history of the National Security Agency (NSA). As perhaps might be expected, release of the book was fraught with controversy. The Reagan administration threatened legal action if Bamford did not return classified documents that the government claimed were released in error. Those documents dealt with the illegal monitoring of domestic communication and surveillance of Americans without a warrant.

Chucky is the nickname of Charles Lee Ray, the main character in the “Chucky” (or “Child’s Play”) series of horror movies. There’s no way that I will watch any of those films, no way …

The name of the drug L-3,4-DihydrOxyPhenylAlanine can be shortened, thankfully, to L-DOPA. Swedish scientist Arvid Carlsson won a Nobel Prize for showing that L-DOPA could be used to reduce the symptoms of Parkinson’s Syndrome.

English apothecary and surgeon James Parkinson wrote “An Essay on the Shaking Palsy” in 1817. This work was the first to describe the disorder that was later to be called Parkinson’s disease in his honor.