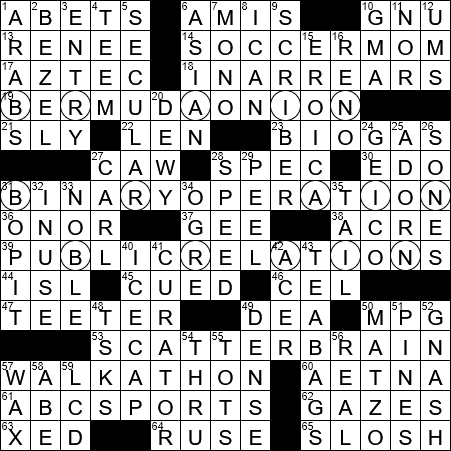 Each of today’s themed answers includes five circled letters SCATTERED throughout. Those letters spell out the word BRAIN:

Bermuda has been a major producer of onions since the 1880s when seed was brought to the island from the Canary Islands off the coast of Africa. Apparently, Ernest Hemingway was a fan of Bermuda onions. While buying some at a market he met a man called Gregorio Fuentes, who Hemingway ended up hiring as the first mate of his boat. Some say that Fuentes was the inspiration for Santiago, the protagonist in “The Old Man and the Sea”. Well, that’s how the story goes …

Biogas is mixture of methane and carbon dioxide resulting from the breakdown of organic matter by anaerobic bacteria. Biogas is used as a renewable energy source, as it is produced from recycled waste.

We use a base-ten numbering system, with ten digits (0 – 9). The binary system, or base two, uses just two digits (0 & 1). The binary system is used at a fundamental level in computing, because the number 0 and 1 can be represented by microcircuits being switched “on” or “off”.

A bezel is a groove which is designed to hold a beveled edge. An example would be the groove around the face of a watch, which accepts the beveled edge of a watch crystal.

“I Can See for Miles” is the biggest selling single for the Who in the United States, and it’s a song that’s got added exposure when it was adopted as the theme tune for the TV show “CSI: Cyber”.

NBC’s “Today” was launched in 1952, becoming the first of the morning news/talk shows on US television. The show’s first host was Dave Garroway, who was at the helm until 1961. Back in those days, “Today” had a mascot who often appeared on air with Garroway: a chimpanzee named J. Fred Muggs.

In the world of acoustics, the sone was introduced as a unit of perceived loudness in 1936.

Carl Sagan was a brilliant astrophysicist and a great communicator. Sagan was famous for presenting obscure concepts about the cosmos in such a way that we mere mortals could appreciate. He also wrote the novel “Contact” which was adapted into a fascinating 1997 film of the same name starring Jodie Foster.

Matzo is an unleavened bread that is very brittle. The bread is crushed, creating Matzo meal that is then formed into balls using eggs and oil as a binder. The balls are usually served in a chicken stock.

18. Late with one’s payments : IN ARREARS

5. Not connected to the church : SECULAR