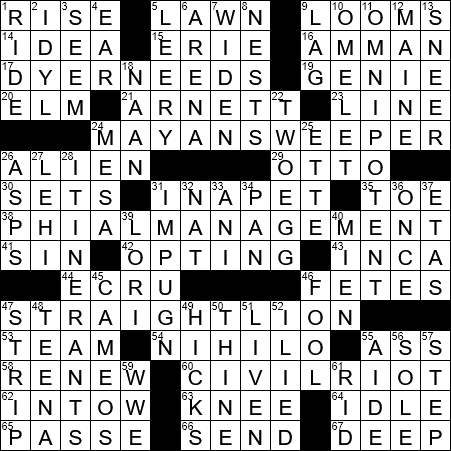 Themed answers sound like common phrases, but an “aye” sound has been replaced with an “aye-ah” sound:

15 Canal that helps connect the Great Lakes to the Atlantic : ERIE

19 Surprise in a bottle : GENIE

Arnett Cobb was a jazz musician who played the saxophone. Cobb’s style of play earned him the nickname “The Wild Man of the Tenor Sax”.

24 One in a Mesoamerican cleanup crew? : MAYAN SWEEPER (from “minesweeper”)

29 Any of four palindromic emperors : OTTO

Apparently, there’s a phrase “in a pet” meaning “in a snit, in a temper”.

Podiatry is a branch of medicine dealing with the foot, ankle and lower extremities.

Nowadays, we would call an apothecary a pharmacist. “Apotecaire” is an Old French word from the 13th century meaning simply “storekeeper”.

The Latin phrase “ex nihilo” means “out of nothing”. The extended phrase “creatio ex nihilo” describes the concept that God created the world out of nothing.

12 Nearly half of New England : MAINE

The geographical region of New England comprises the six northeastern states of Connecticut, Maine, Massachusetts, New Hampshire, Rhode Island, and Vermont. The name “New England” was given to the region by English explorer John Smith in 1616, just a few years before the Mayflower arrived in 1620.

The Utah city of Lehi was first settled in 1851. The settlement grew rapidly and was incorporated in the second year of its existence, in 1852. The name Lehi was chosen after a prophet in the Book of Mormon.

The Washington Nationals (“Nats”) started out life as the Montreal Expos in 1969, and were the first Major League Baseball team in Canada. The Expos moved to Washington in 2005 becoming the Nats. There are only two Major Leagues teams that have never played in a World Series, one being the Mariners and the other the Nats.

33 Request from a Midwestern cheerleader, maybe : AN I

Pan flutes (also “panpipes”) are folk instruments that have been around along time, and are believed to be the first mouth organs. The pan flute is named for the Greek god Pan, who was often depicted playing the instrument.

Lori Petty is the actress who played the character Kit Keller in the fabulous movie “A League of Their Own”. Petty also played the title role in a 1995 science fiction film called “Tank Girl”.

45 Hitchcock was known for them : CAMEOS

Taylor Hicks is the singer who won the fifth season of “American Idol”. Talk show host Jay Leno likes to refer to Hicks as “his son”, because the two have full heads of gray hair. Hicks started to go gray when he was just 14-years-old.

World Wrestling Entertainment (WWE) is a company promoting professional wrestling as a form of entertainment.