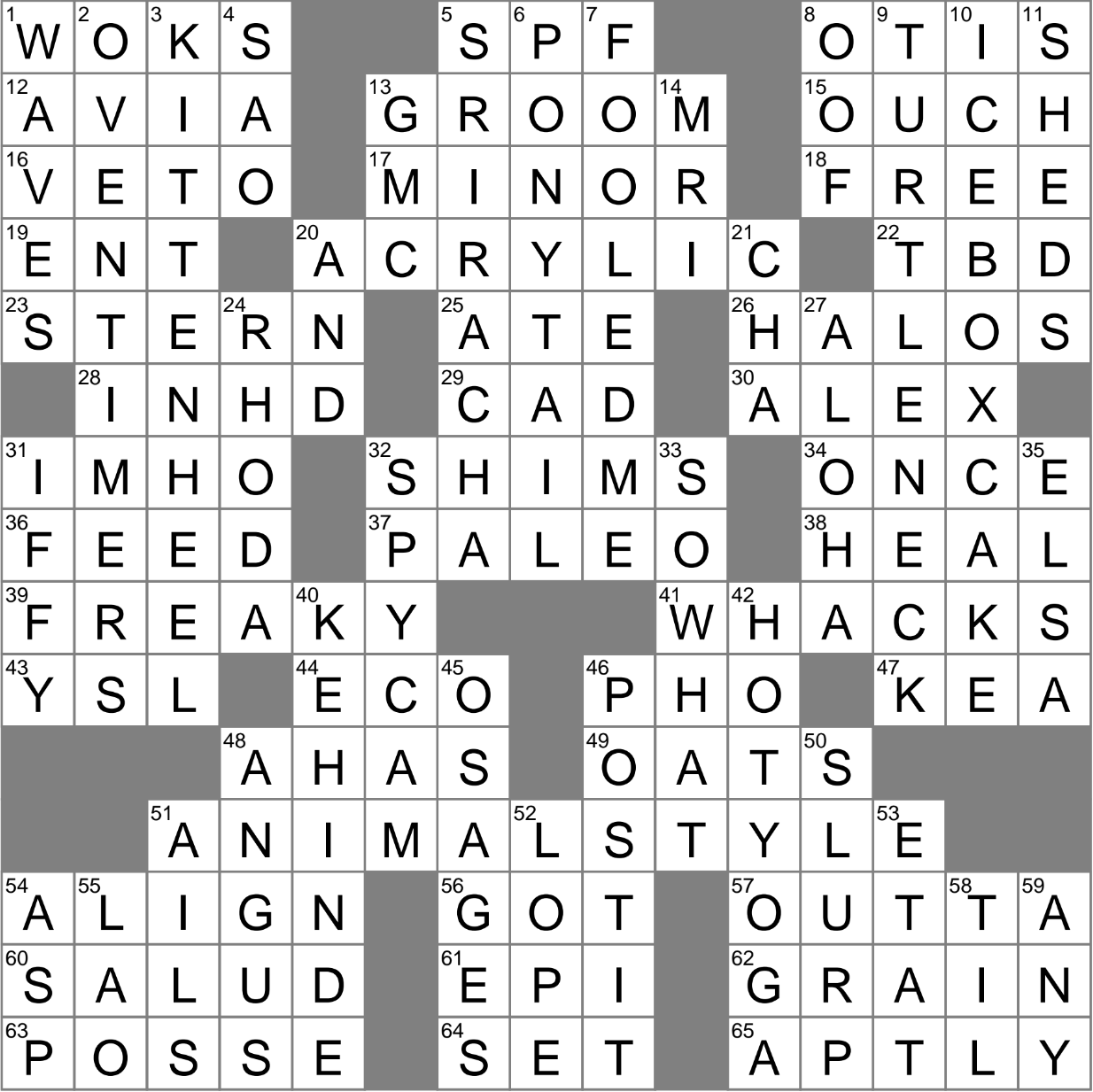 Themed answers all relate to STYLE, and each starts with an ANIMAL:

5 Letters on a foundation? : SPF

Although there have been several “oval” offices used by US presidents in the White House, the current Oval Office was designed and constructed at the bequest of President Franklin D. Roosevelt. The room has four doors. One door opens onto the Rose Garden; a second door leads to a small study and dining room; a third opens onto the main corridor running through the West Wing; the fourth door opens to the office of the president’s secretary.

An ear, nose and throat specialist (ENT) uses an otoscope to look into the interior of one’s ears.

To be determined (TBD)

28 With crisp resolution : IN HD

30 Kingston with a recurring role on “Doctor Who” : ALEX

I know actress Alex Kingston best from playing River Song, the future companion to the title character in the iconic BBC sci-fi series “Doctor Who”. For many years, her partner and eventual husband was fellow English actor Ralph Fiennes, whom she met while they both were studying at the Royal Academy of Dramatic Art (RADA) in London.

The prefix “paleo-” means “prehistoric, primitive”. It comes from the Greek word “palaios” which means “old, ancient”. The prefix “neo-” would be the opposite, meaning “new, recent”.

The terms “goose bumps” and “goose flesh” come from the fact that skin which is cold can look like the flesh of a plucked goose.

“Muesli” is a Swiss-German term describing a breakfast serving of rolled oats, nuts, fruit and milk. The dish can be soaked overnight in milk before serving (“overnight oats”). “Muesli” is a diminutive of the German word “Mues” meaning “puree”. Delicious …

51 Option on In-N-Out Burger’s not-so-secret menu, or the fashion sense that includes the answers to the starred clues? : ANIMAL STYLE

Apparently, some fast-food restaurants maintain a “secret” menu of unadvertised selections that customers hear about on the grapevine.

In-N-Out Burger is a fast food chain that’s very popular out here on the left coast. Unusually for a fast food business, In-N-Out Burger has no franchises and is privately owned. The company also prides itself on paying all employees above minimum wage. Also, if you check the packaging of the food and drink items, you’ll find a bible verse discreetly printed on the bottom of cups and wrappers, reflecting the Christian beliefs held by the company ownership. In-N-Out Burger was founded in 1948 by Harry and Esther Snyder, and is now owned by Lynsi Snyder, the couple’s only grandchild.

Quiet on the set!

Kitten heels are short stiletto heels. As well as being shorter, the heel curves in slightly from the back of the shoe. They were introduced in the late 1950s, and popularized by the stylish actress Audrey Hepburn.

Sriracha hot chili sauce is named for the coastal city of Si Racha in eastern Thailand, where the recipe likely originated. Here in North America, we are most familiar with the Sriracha sold in a red bottle with a green that is made by Huy Fong Foods in the city of Irwindale, California. The manufacturer was founded by Vietnamese refugee David Tran, who escaped from Vietnam in 1978 on a Taiwanese freighter called the Huey Fong, after which he named his new company.

6 *Updo in a scrunchie, maybe : PONYTAIL

When Rommy Wevson patented the Scrunchie hair tie in 1987, she called it a “Scunci”, after her pet poodle.

9 *Shirt with a snug collar : TURTLENECK

The garment that we know as a “turtleneck” here in North America, is called a “polo neck” or “roll-neck” on the other side of the Atlantic, and a “skivvy” in Australia and New Zealand.

GMC is a division of General Motors (GM) that was established in 1901 and started out as “GMC Truck”.

Mandarin Chinese is a group of dialects that are spoken across northern and southwestern China. If Mandarin is considered as one language, then it has more native speakers than any other language on the planet.

Kehinde Wiley is a portrait painter based in New York City. Perhaps most famously, he painted a portrait of President Barack Obama in 2018 for the National Portrait Gallery. In the painting, the former president is seated on a chair that appears to float among green foliage.

Hot yoga is performed under relatively hot and humid conditions. The actual temperature and humidity levels are often chosen to resemble those found in India, where yoga originated.

The Osage Nation originated in the Ohio River valley in what we now call Kentucky. The name “Osage” was first used by French traders for the people who called themselves “Ni-U-Ko’n-Ska”, meaning “Children of the Middle Water”.

The Post-it note was invented at 3M following the accidental discovery of a low-tack, reusable adhesive. The actual intent of the development program was to produce a super-strong adhesive.

The full name of the cattle breed is Aberdeen Angus, which is also the name used around the world outside of North America. The breed was developed by crossbreeding cattle from the counties of Aberdeenshire and Angus in Scotland. The breed stands out in the US as Angus cattle don’t have horns.

In French, “Californie” (California) is an “état” (state).

The Egyptian cobra (Naja haje) is also known as the asp. That said, the term “asp” can apply to several species of snake, including the Egyptian cobra. Legend has it that Cleopatra committed suicide by enticing an asp to bite her. If that’s true, then that asp was probably an Egyptian cobra.

The present-day nation of Laos can trace its roots back to the historic Lao kingdom of Lan Xang that existed from 1354 to 1707. The full name of the kingdom was “Lan Xang Hom Khao”, which translates as “The Land of a Million Elephants and the White Parasol”.