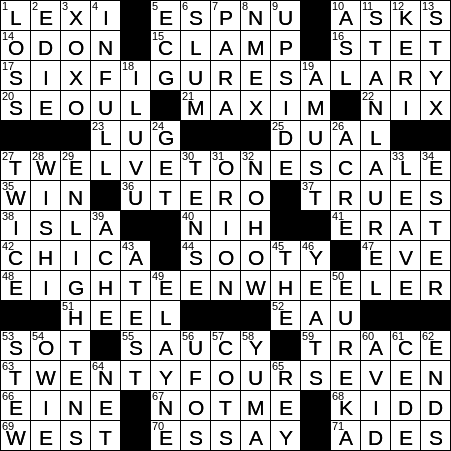 Themed answers start with multiples of SIX that increase as we descend the grid:

1 Golfer __ Thompson, who had her first LPGA tournament win at age 16 : LEXI

Lexi Thompson has been a professional golfer since the age of 15, and won her first LPGA tournament at just 16 years of age, which is a record. Thompson had also qualified for the US Women’s Open when she was the ripe old age of 12 years, making her the youngest golfer to play in that tournament.

A diatonic scale is one with which we’re most familiar perhaps, with the simplest being the C-major scale: C–D–E–F–G–A–B. For the key of C, these are all seven white notes on a piano keyboard. If we play all the black notes as well, then we end up with a scale of twelve pitches. This is a chromatic (also “twelve-tone”) scale.

“In utero” is a Latin term meaning “in the uterus”. The Latin “uterus” (plural “uteri”) translates as both “womb” and “belly”. The Latin word comes from the Greek “hystera” that also means “womb”, which gives us the words “hysterectomy”, and “hysterical”.

The Island of Majorca (“Isla Mallorca” in Spanish) is Spain’s largest island, and is located in the Mediterranean Sea. The population of the island ballooned over the past few decades as Majorca became a mecca for tourists from all over Europe.

William Kidd was a Scottish privateer who went by the name “Captain Kidd”. Although Kidd was a privateer, someone authorized by the government to attack foreign shipping, he was eventually arrested and executed for piracy. There is a common opinion held today that the charges against Kidd were actually trumped up. Captain Kidd’s story was the basis of a 1945 film called “Captain Kidd” starring Charles Laughton in the title role. Laughton also appeared as Captain Kidd in 1952’s comic movie “Abbott and Costello Meet Captain Kidd”.

An EKG measures the electrical activity in the heart. Back in my homeland of Ireland, an EKG is known as an ECG (for electrocardiogram). We use the German name in the US, Elektrokardiogramm, giving us EKG. Apparently the abbreviation EKG is preferred as ECG might be confused (if poorly handwritten, I guess) with EEG, the abbreviation for an electroencephalogram.

The region now covered by the US state of New Mexico (NMex) was known as “Nuevo México” at least since 1563. Spanish explorers gave the area this name due to an erroneous belief that it was home to a branch of the Mexica, an indigenous people living in the Valley of Mexico. So, the region has had the “New Mexico” name for centuries before the nation of Mexico adopted its name in 1821.

18 Candy heart sentiment : I LUV U

34 Compound with a fruity aroma : ESTER

45 First word in many Grisham titles : THE …