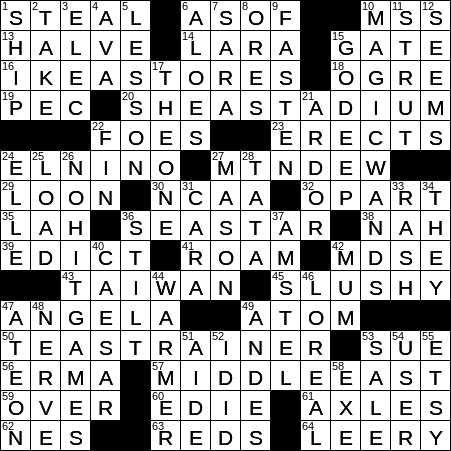 Themed clues include “EAST” in the MIDDLE, as a hidden word:

Lara Spencer has been co-anchor of “Good Morning America” since 2011, working alongside Robin Roberts and George Stephanopoulos. Back in 2004/2005, PBS viewers will have seen Spencer hosting the hit show “Antiques Roadshow”.

“Selma” is a 2014 film about the Selma to Montgomery marches of 1965. Directed by Ava DuVernay, the movie stars David Oyelowo as Martin Luther King, Jr. and Tom Wilkinson as President Lyndon B. Johnson.

They Might Be Giants is an alternative rock band that formed in 1982. The band’s name is lifted from the 1971 movie of the same name starring George C. Scott.

Amstel is a Dutch beer and brewery that was founded in 1870 in Amsterdam. The brewery takes its name from the Amstel river that runs through the city.

L’Oréal is a French cosmetics company, and indeed the largest cosmetics and beauty company in the world. Here in the US, L’Oréal runs a “Women of Worth” program that honors women who volunteer in their communities.

The Andes range is the longest continuous chain of mountains in the world. It runs down the length of the west coast of South America for about 4,300 miles, from Venezuela in the north to Chile in the south. The highest peak in the Andes is Mt. Aconcagua, at an elevation of 22,841 feet. Interestingly, the peak of Mt. Chimborazo in Ecuador is the furthest point on the Earth’s surface from the center of the planet. That’s because of the equatorial “bulge” around the Earth’s “waist”.

Read on, or …\\\\pssssssssssssddd
… return to top of page