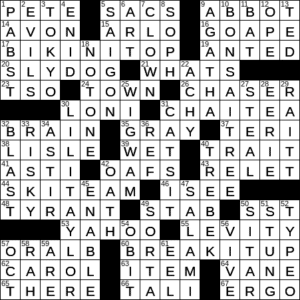 Today’s Reveal Answer: Break It Up

Themed answers each comprise two words, the first ending with I and the second starting with T:

23 General with a Chinese dish named for him : TSO

“Tootsie” is a hilarious 1982 comedy starring Dustin Hoffman in the title role, a male actor who adopts a female identity in order to land an acting job. Jessica Lange won a Best Supporting Actress Oscar for her performance in the film. “Tootsie” also provided Geena Davis with her first movie role.

Comedian and actress Carol Burnett is perhaps best known for “The Carol Burnett Show” which ran on television for over ten years from 1967 to 1978. My favorite of Burnett’s performances is in the 1981 film “The Four Seasons”. The Golden Globe’s Carol Burnett Award for career achievement in television was inaugurated in 2019, with Burnett being the first recipient.

The 2020 Summer Olympics were rescheduled from 2020 to 2021 due to the COVID-19 pandemic. Whenever it takes place, the Games are scheduled to take place in Tokyo. Tokyo first hosted the Olympics in 1964.

The Agathas are literary awards given annually for mystery and crime writers producing exceptional works in the “cozy mystery” genre. “Cozies” are crime fiction in which there is a dearth of sex and violence, and in which the crime is committed and solved in a small community or gathering. The awards are named for the queen of the cozy mystery genre, Agatha Christie.

The terms “wickiup” and “wigwam” are generally synonymous, with the former used mainly in the Southwest and West, and the latter used in the Northeast and Canada. Wickiups/wigwams are domed structures with a frame made from arched poles, and covered with a roofing material such as grass, bark, reeds, hide or cloth.

Bonnie Raitt is a blues singer who is originally from Burbank, California. Raitt has won nine Grammys for her work, but she is perhaps as well known for her political activism as she is for her music. She was no fan of President George W. Bush while he was in office, and she sure did show it.

Tabbies aren’t a breed of cat, but rather are cats with particular markings regardless of breed. Tabbies have coats with stripes, dots and swirling patterns, and usually an “M” mark on the forehead.

Alex Trebek has been the host of “Jeopardy!” since the syndicated version of the game show launched in 1984. Trebek has missed just one episode since then, when he and host of “Wheel of Fortune” Pat Sajak swapped roles in 1997 as an April Fool’s joke. In 2014, Trebek picked up the Guinness World Record for hosting the most episodes of a game show.

“In memoriam” is a Latin phrase that we use in English to mean “in memory of” when referring to a person that is deceased.