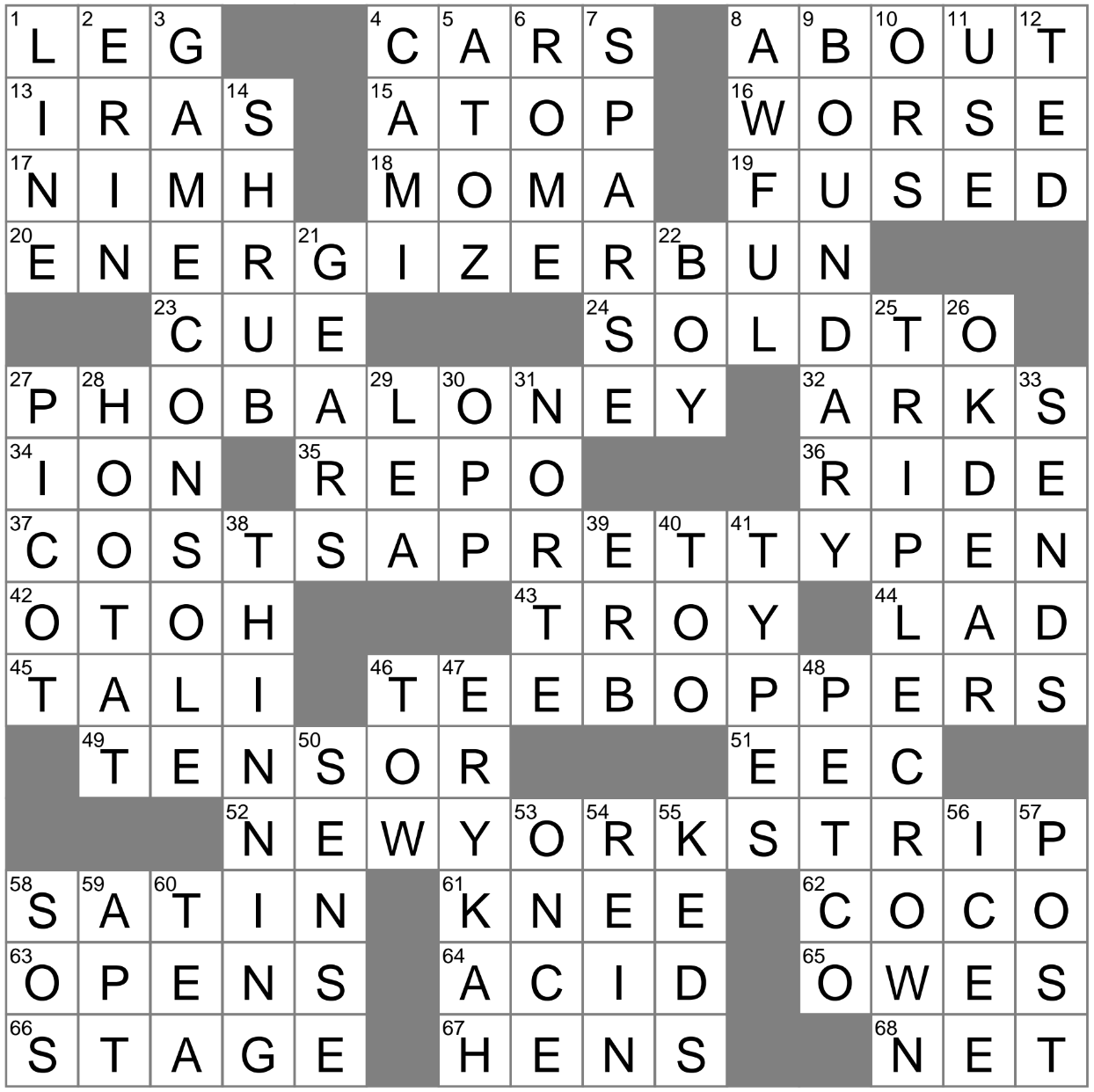 Themed answers are common phrases with a -NY suffix STRIPPED away:

Lightning McQueen is the protagonist in the “Cars” series of Pixar animated movies. He is an anthropomorphic stock car, and is voiced by actor Owen Wilson. It is often assumed that the character was named for actor and sometime race car driver Steve McQueen. In fact, he was named in honor of Pixar animator Glenn McQueen, who passed away a few years before the first “Cars” film was released.

“The Secret of NIMH” is the 1982 screen adaptation of a book written by Robert C. O’Brien. The novel’s title is “Mrs. Frisby and the Rats of NIMH”. “Mrs. Frisby” doesn’t actually appear in the movie version, at least not under the same name. In the film her character is called Mrs. “Brisby”, with the name change being made due to concerns about a potential trademark dispute with “Frisbee” discs.

18 NYC gallery with a Bell helicopter on display : MOMA

The Bell-47D1 helicopter was manufactured between 1946 and 1973, with over three thousand units sold in forty countries. We are perhaps most familiar with the craft as an aerial ambulance used during the Korean War (from the TV show “M*A*S*H). The aircraft’s design, featuring a plastic bubble housing the cockpit, is reminiscent of dragonfly, and earned it the nickname the bug-eyed helicopter. So iconic was the design that there is one on display in the Museum of Modern Art (MoMA) in New York City.

“Baloney” is an American English variant of “Bologna” as in the sausage. The term came to be used to mean “nonsense” in the 1920s. “Baloney” was popularized in the 1930s by New York Governor Alfred E. Smith as he used the term quite often.

Lithium-ion and nickel-cadmium are types of rechargeable batteries.

37 Valued at one fancy ballpoint? : COSTS A PRETTY PEN (from “costs a pretty penny”)

The European Economic Community (EEC) was also known as the Common Market. The EEC was a NAFTA-like structure that was eventually absorbed into today’s European Union (EU).

52 Chophouse order, and an apt title for this puzzle? : NEW YORK STRIP

Delmonico’s Restaurant in New York City, which dates back to 1827, had a signature cut of short loin that was served as a Delmonico steak. That same cut came to be known in the US as a New York strip steak, due to the association with the city and the restaurant.

Our verb “to genuflect” means “to bend the knee, in worship”. The term comes to us via French from the Latin “genu” meaning “knee” and “flectere” meaning “to bend”.

Coco Gauff is a professional tennis player from Atlanta whose career really got a boost when she beat Venus Williams in the opening round of Wimbledon in 2019. Ironically, Venus, and her sister Serena, were the players who inspired Gauff to take up tennis as a girl.

1 Command to a prompter : LINE!

2 Actress Moriarty who plays Starlight on “The Boys” : ERIN

Erin Moriarty is an actress from New York City whose big break came when she landed the role of Starlight (aka AnnieJanuary) in the superhero TV series “The Boys”.

3 PlayStation, for one : GAME CONSOLE

Greenland is the largest island on the planet. Geographically, Greenland is part of the continent of North America, but culturally and politically is considered part of Europe. The island became a Danish colony in 1815, and joined the European Economic Community (EEC) with Denmark. Greenland withdrew from the EEC after a referendum in 1983. Since 2009, Greenland has been relatively autonomous, with the Danish government retaining control of foreign affairs, defense and the judicial system.

Greenland is the largest island on the planet. Geographically, Greenland is part of the continent of North America, but culturally and politically is considered part of Europe. The island became a Danish colony in 1815, and joined the European Economic Community (EEC) with Denmark. Greenland withdrew from the EEC after a referendum in 1983. Since 2009, Greenland has been relatively autonomous, with the Danish government retaining control of foreign affairs, defense and the judicial system.

The acronym “TED” stands for “Technology, Entertainment and Design”. TED is a set of conferences held around the world by a non-profit group called the Sapling Foundation. The conference subjects are varied, and the meetings are often led by big names such as Bill Clinton, Al Gore, Bill Gates and Jane Goodall. The Sapling Foundation then makes recordings of the conferences available for free online with the intent of disseminating the ideas globally. These conferences are known as “TED Talks”. There are also TEDx events, which are locally-run talks presented under license from TED.

Azaleas are very toxic to most animals. If you go to Korea, you might come across “Tug Yonju”, which is azalea wine made from the plant’s blossoms. Azaleas are usually grown as shrubs, but are also seen as small trees, and often indoors.

“If I Were a Boy” is a 2008 song co-written and performed by singer-songwriter and actress BC Jean. Beyoncé recorded a cover version that same year, the version that is most well known.

The US Triple Crown horse races are, in order through the year:

A picot is a loop of thread, either for function or for decoration, at the edge of some knitted or tatted material.

French actress Léa Seydoux is perhaps best known to US audiences for portraying Bond girl Madeleine Swann in two movies: “Spectre” and “No Time to Die”. I best know her for playing the charming antique dealer in the magnificent film “Midnight in Paris”.

Edgar Rice Burroughs (ERB) was an author from Chicago who is best known as the creator of the “Tarzan” series of novels. Burroughs’ daughter Joan ended up marrying James Pierce, the actor who was the fourth to portray Tarzan on film. James and Joan Pierce also worked together, playing Tarzan and Jane on the radio show “Tarzan” from 1932 to 1934.

How common a particular blood type in a population varies quite a bit depending on ethnicity. In general, the rarest blood type is AB-negative. The most common blood type is O-positive.

Petco is a chain of retail stores that sells live animals and pet supplies. The Petco logo includes the two company mascots, Red Ruff the dog and Blue Mews the cat.