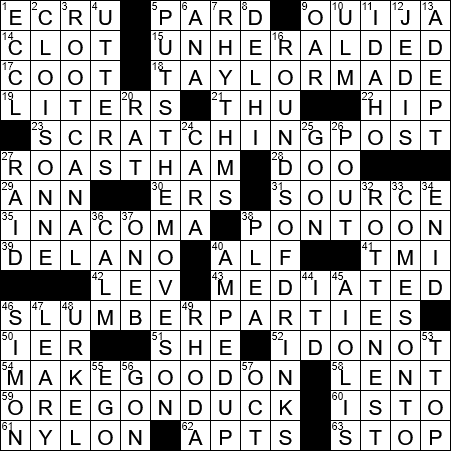 1. Color in the brown family : ECRU

9. Board that decides without voting : OUIJA

TaylorMade is a brand of golf products that is now owned by Adidas. The Taylormade company was founded in 1979 by Gary Adams in order to manufacture and sell a 12-degree loft metalwood. TaylorMade now sells more drivers than any other company.

21. Only one fed. holiday falls on it annually : THU

“Scooby-Doo, Where Are You!” is a series of cartoons produced for Hanna-Barbera Productions, first broadcast in 1969. The title character is a great Dane dog owned by a young male called Shaggy Rogers. The character’s name was inspired by the famous “doo-be-doo-be-doo” refrain in the Frank Sinatra hit “Strangers in the Night”. Shaggy was voiced by famed disk jockey Casey Kasem.

The aircraft known as a floatplane differs from a flying boat. The former uses pontoons under the fuselage to provide buoyancy, whereas the latter’s buoyancy comes from the fuselage itself.

TMI (too much information!)

The term “skipper”, used for the captain of a ship, comes from the Middle Dutch “scipper”, which has the same meaning. “Scip” is Dutch for “ship”.

The sports teams of the University of Oregon are known as the Oregon Ducks. The big rivals to the Ducks are the Oregon State Beavers, a rivalry that has been dubbed “the Civil War”. The two schools’ football teams play a game every year for the Platypus Trophy.

The polymer known as “nylon” was developed by Dupont in the 1930s. The first application for the new product was as bristles in toothbrushes, in 1938. The second application became more famous. The first stockings made from nylon were produced in 1940, and since then stockings have been known as “nylons”. The polymer was developed as a replacement for silk, which was to become in short supply during WWII.

Ecclesiastes is a book in the Hebrew Bible and in the Christian Old Testament. The term “ecclesiastes” is usually translated as “teacher” or “preacher”, although a more literal translation is “gatherer”.

“Cloisonné” is an ancient technique that uses vitreous enamel to decorate metalwork. The technique involves the addition of metal compartments to the surface of the piece, made by soldering silver or gold wires that form the edges of each compartment. Vitreous enamels of various colors are then added to each compartment and the whole piece fired. “Cloison” is a French word meaning “compartment, partition”.

The specialty field of dentistry known as endodontics is concerned with the treatment of the dental pulp, the living tissue found within a tooth.

What we know today as the Commonwealth Games, were inaugurated in 1930 as the British Empire Games. The title of the event evolved along with the fluctuation of Britain’s influence in the world.

11. State in both the Pacific and Mountain time zones : IDAHO

The US state of Idaho has a panhandle that extends northwards between Washington and Montana, right up to the border with Canada. Across that border is the Canadian province of British Columbia. Most of Idaho is in the Mountain Time Zone, but Northern Idaho (the Panhandle) is in the Pacific Time Zone.

In Italian, “cara” (dear) is a word of “amore” (love) that is spoken “con affetto” (with affection).

Actor Denis Leary started his career as a standup comedian working in Boston. One of his more famous roles on the big screen was Detective Michael McCann in the 1999 version of “The Thomas Crown Affair”. On the small screen, Leary was co-creator and star of “Rescue Me”, a comedy drama about New York City firefighters that ran from 2004 till 2011.

Steve Urkel is a character on the TV show “Family Matters” that originally aired in the late eighties and nineties. The Urkel character was the archetypal “geek”, played by Jaleel White. Urkel was originally written into the show’s storyline for just one episode, but before long, Urkel was the show’s most popular recurring character.