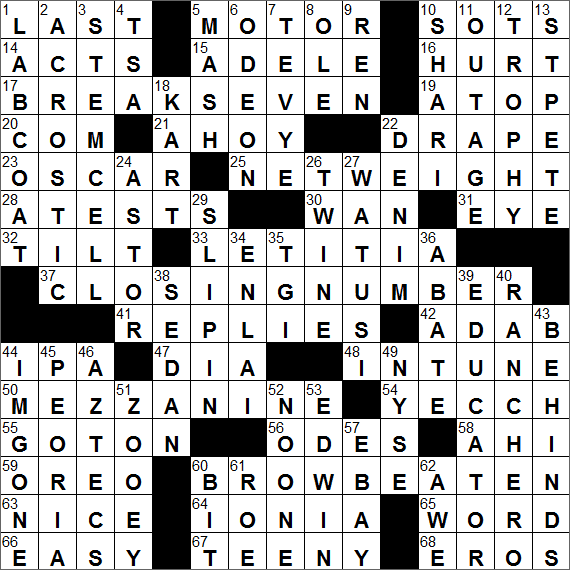 Our themed answers today each CLOSE with a hidden NUMBER:

Hollywood actor William Hurt was born in Washington, D.C., where his father worked for the State Department. As a result of his father’s job assignments, William lived in Pakistan, Somalia and the Sudan growing up. Later he studied at Juilliard, and there was a classmate of Christopher Reeve and Robin Williams.

Letitia Baldridge was a public relations executive known as an expert on etiquette, and as the “Doyenne of Decorum”. Famously, Baldridge worked for First Lady Jacqueline Kennedy as her Social Secretary.

India Pale Ale (IPA) is a style of beer that originated in England. The beer was originally intended for transportation from England to India, hence the name.

A mezzanine in a building is a low story between two taller ones. The term came to be used for the lowest balcony in a theater in the 1920s.

Jan Neruda was a Czech journalist and poet.

An acrostic is a word puzzle. One part of the puzzle is a quote, which has been rendered unreadable by replacing each letter with a number. The second part of the puzzle gives clues (like a crossword) that reveal the numbers needed to unmask the quote.

The enduring musical “Fiddler on the Roof” is based on a collection of stories by Sholem Aleichem about Tevye, a milkman living in Tsarist Russia. The musical version of the tales first opened on Broadway in 1964. “Fiddler on the Roof” had such a long run that it became the first musical to reach 3,000 performances.

A power outage would be a “delighted” state, when the “lights have gone out”.

St. Petersburg, Florida is often referred to as St. Pete by locals and visitors alike. The neighboring city of St. Petersburg Beach also had its name shortened routinely, so in 1994 the residents voted to change the name officially to St. Pete Beach.

John Jacob Astor IV was a member of the famous and wealthy Astor family of New York. Astor and his second wife Madeleine were passengers on the RMS Titanic when it made its fateful journey in 1912. John did not survive the tragedy, and was the wealthiest person to go down with the ship. Madeleine was picked up in a lifeboat, along with her nurse and maid.

Zhou Enlai (also Chou En-Lai) was the first government leader of the People’s Republic of China and held the office of Premier from 1949 until he died in 1976. Zhou Enlai ran the government for Communist Party Leader Mao Zedong, often striking a more conciliatory tone with the West than that of his boss. He was instrumental, for example, in setting up President Nixon’s famous visit to China in 1972. Zhou Enlai died just a few months before Mao Zedong, with both deaths leading to unrest and a dramatic change in political direction for the country.

Tenochtitlán was a city-state that was the capital of the Aztec Empire in the 15th century. It was located in on an island in Lake Texcoco in the Valley of Mexico. After Tenochtitlán was captured by the Spanish in 1521, they leveled the city and their own settlement, which grew into today’s Mexico City.

The famous Hubble Space Telescope was installed in orbit by the Space Shuttle Discovery in 1990. The telescope was named for the astronomer Edwin Hubble, the man who changed our view of the universe by postulating that the universe is expanding.

PayPal is an e-commerce business that has been around since the year 2000, born out of a merger of two older companies: Confinity and X.com. PayPal performs payment processing for online vendors. The company was so successful that it was the first of the beleaguered dot.com companies to successfully complete an IPO after the attacks of 9/11. Then in 2002, PayPal was bought by eBay for a whopping $1.5 billion. eBay spun off PayPal into a separate public company in 2014.

48…Ready for the piano recital..IN TUNE