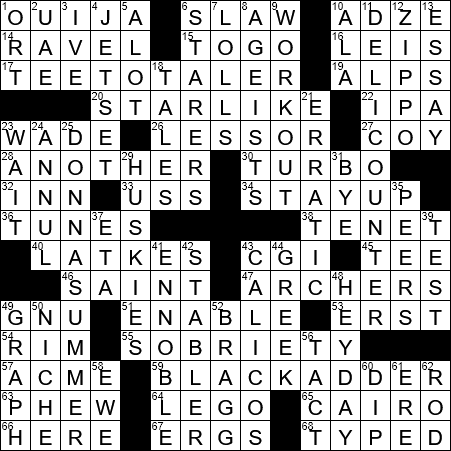 Today’s Theme (according to Bill): End of the Calculator

Each of today’s themed answers ends with a synonym of “calculator”:

6 Diner side dish with cabbage : SLAW

Maurice Ravel’s “Boléro” is a remarkable piece of music that has a very insistent theme that just builds and builds, with instruments being added to the mix as the piece develops. Famously, “Boléro” played a significant role in the 1979 film “10” starring Bo Derek, Dudley Moore and Julie Andrews. Not a bad movie …

17 One who shuns alcohol : TEETOTALER

In the Old West, a sheriff’s badge was often referred to as a “tin star”.

The Bangles are a band that formed in Los Angeles in 1980, a trio of female musicians. The group went through a few names before settling on the Bangles, namely the Colours, the Supersonic Bangs and the Bangs. The Bangles’ biggest hits are “Manic Monday” (1986), “Walk Like an Egyptian” (1986) and “Eternal Flame” (1989).

“Manic Monday” was a big hit for the Bangles in 1986. The song was actually written by Prince, and offered to the Bangles under the pseudonym “Christopher”.

The New Year’s celebration in Scotland is known as Hogmanay, although the term “Hogmanay” actually applies to New Year’s Eve. Such is the extent of the party for Hogmanay, that New Year’s Day is a public holiday across the country, and so is January 2nd.

A rim shot is a sound made when a drummer hits the head of a drum and the rim at the same time. It’s a sound often used by comics to help punctuate a gag.

Domestic cats with a white coat and patches of brown and black are called calico cats in this country. Back in Ireland, and the rest of the world I think, such cats are called tortoiseshell-and-white. “Calico” is not a breed of cat, but rather a coloring.