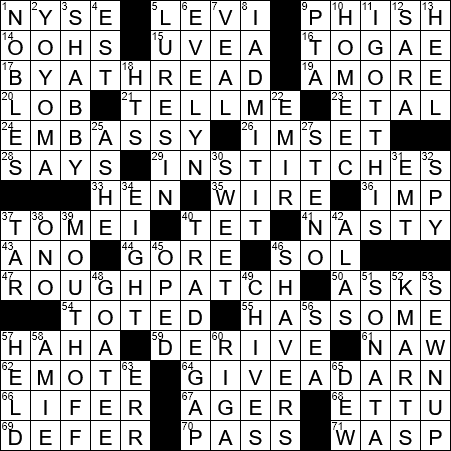 Themed answers each end with a word related to SEWING:

Marisa Tomei’s first screen role was in the daytime soap “As the World Turns”, but her break came with a recurring role in “The Cosby Show” spin-off “A Different World”. Tomei won an Oscar for her delightful performance in “My Cousin Vinny” in 1992.

Evelyn Waugh was an English author who is most famous for his fabulous 1945 novel “Brideshead Revisited”. Evelyn Waugh met and fell in love with Evelyn Gardner in 1927. Known to friends as “He-Evelyn” and “She-Evelyn”, the couple were married in 1929 (but divorced one year later).

The character James Bond was the creation of writer Ian Fleming. Fleming “stole” the James Bond name from an American ornithologist. The number 007 was “stolen” from the real-life, 16th century English spy called John Dee. Dee would sign his reports to Queen Elizabeth I with a stylized “007” to indicate that the reports were for “her eyes only”. There’s an entertaining miniseries that aired on BBC America called “Fleming: The Man Who Would Be Bond” that details Ian Fleming’s military career, and draws some nice parallels between Fleming’s experiences and aspirations and those of his hero James Bond. Recommended …