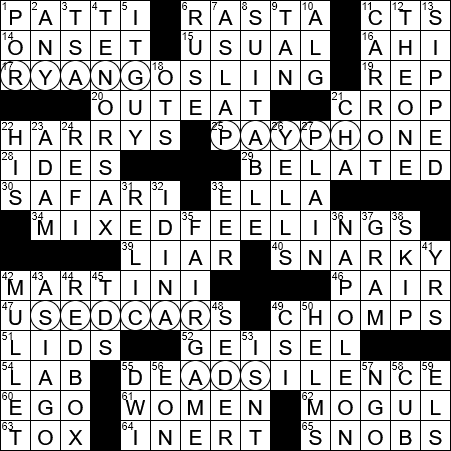 Themed answers each include a set of letters that if UNMIXED spell out a FEELING:

When writing an amount of money, the two digits to the right of the decimal point signify a number of cents (cts.).

Harry Styles is a singer from England who got his big break when he appeared on the British version of “The X Factor”, from which he was selected as an original member of the boy band One Direction. Styles turned to acting, and had a significant role in the 2017 war movie “Dunkirk”. Reading the gossip columns reveals that he dated Taylor Swift for a while in 2012.

A dirty martini is a regular martini with a splash of olive juice, served with an olive garnish.

Bugs Bunny first said “What’s up, Doc?” while addressing the hunter Elmer Fudd, in the 1940 cartoon short “A Wild Hare”.

Adam Driver is an actor best known to TV audiences for playing Adam Sackler on the show “Girls” that airs on HBO. Driver’s movie career got a huge boost in 2015 when he played villain Kylo Ren in “Star Wars: The Force Awakens”.

Today, the gram is defined as one thousandth of a kilogram, with the kilogram being equal to the mass of physical sample preserved by the International Bureau of Weights and Measures. Prior to 1960, the gram was defined as the weight of a cubic centimeter of pure water (at the temperature of melting ice).

Redbox is known for renting DVDs from automated retail kiosks placed in locations such as grocery stores and fast food restaurants. Perhaps in an obvious move, Redbox now offers a video streaming service called “Redbox Instant”, a joint-venture with Verizon.

“Isn’t She Lovely” is a Stevie Wonder song that he released in 1976. The song refers to Wonder’s daughter Aisha Morris, who was born in the prior year.

The great musician Stevie Wonder signed up with Motown Records when he was just 11-years-old. He has been remarkably loyal to the label and is still recording with Motown some 50 years later. The level of Stevie Wonder’s success is illustrated by his 22 Grammy Awards, the most Grammys awarded to a male solo artist. Wonder was born 6 weeks prematurely, and incomplete development of blood vessels in his eyes caused the retinas to detach leaving him blind soon after birth. His mother, Lula Mae Hardaway, co-wrote many of Stevie’s songs when he was a teenager, including “I Was Made to Love Her”, “Signed, Sealed, Delivered I’m Yours” and “I Don’t Know Why I Love You”.