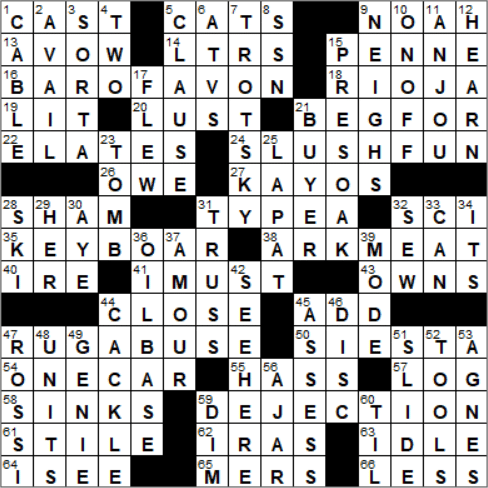 Themed answers are common phrases with with a letter D removed, a “D ejection”:

5. Sylvester and others : CATS

14. Predecessors of much email: Abbr. : LTRS

16. Shakespeare’s riverside haunt? : BAR OF AVON (from “Bard of Avon”)

A “slush fund” is a sum of money that is held in reserve, or in the case of illicit dealings, A SUM that is used for paying bribes.

That would be us, and proud of it …

55. World’s most cultivated avocado, named for its developer : HASS

The Hass avocado was named for amateur horticulturist Rudolph Hass who developed the cultivar. The mother tree that Hass used was patented in 1935, marking the first time that a patent was issued on a tree in the US.

The log-rolling competition traditionally engaged in by lumberjacks is referred to as “roleo”.

Jacques-Yves Cousteau started off his career in the French Navy, aiming for a working life in aviation. Because of a car accident, Cousteau had to abandon his first career choice and instead went to sea. Famously, he co-invented the Self Contained Underwater Breathing Apparatus (SCUBA), also called the aqua-lung.

Chick Hearn was the play-by-play announcer for the LA Lakers for 36 years, from 1965 until 2001. Hearn coined, or at least popularized, phrases such as “slam dunk”, “air ball” and “no harm, no foul”.

A sepulcher is a burial vault. The term “sepulcher” ultimately comes from the Latin “sepelire” meaning “to bury, embalm”.

The US’s National Ski Patrol was founded in 1938 by Charles Minot “Minnie” Dole, with the first deployment taking place in Stowe, Vermont.

Cunard’s ocean liner Queen Elizabeth 2 (QE2) was launched in 1967. The QE2 was taken out of service in 2008 and purchased by investment firm which is converting the vessel into a floating hotel that will be moored in Dubai.

The word “it’s” is a contraction for “it is”, as in “it’s a fun crossword”. The spelling “its”, without an apostrophe, is used in all other cases, most commonly as the possessive form of the pronoun “it”. In that sense, “its” is akin to the pronouns his, hers, ours, etc., as in “the newspaper is known for its great crosswords”.

The Disney animated feature “Aladdin” was released in 1992 and is one of the best movies to come out of the studio, in my opinion, largely due to the great performance by Robin Williams who voiced the Genie. “Aladdin” was the most successful film of 1992, earning over $500 million worldwide, an unusual feat for an animated movie.

Saint Agnes is the patron saint of young girls. John Keats wrote a poem called “The Eve of Saint Agnes” which refers to the superstition that young women should practice certain rituals on Saint Agnes’s Eve in order to identify their future husbands.

The English poet John Keats died in Rome in 1821, and is buried there in the Protestant Cemetery. His last wish was that his grave be marked with a tombstone bearing just the words “”Here lies One whose Name was writ in Water”, and no name nor a date. Keats’ friends honored his request to some extent, as the words were included on the stone and no name is given. The full epitaph reads:

This Grave
contains all that was Mortal
of a
Young English Poet
Who
on his Death Bed, in the Bitterness of his Heart
at the Malicious Power of his Enemies
Desired
these Words to be
engraven on his Tomb Stone:
Here lies One
Whose Name was writ in Water.
24 February 1821