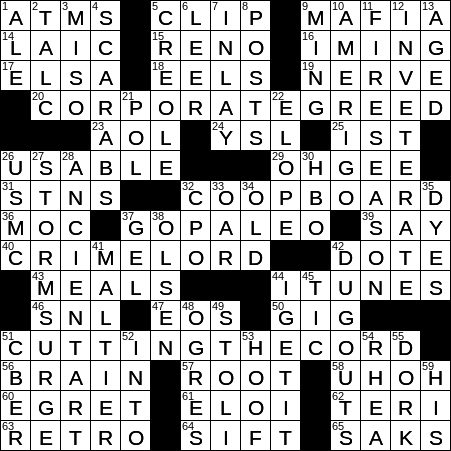 Themed answers are bounded by the letters CORD:

“Wall Street: Money Never Sleeps” is the 2010 sequel to the 1987 hit movie “Wall Street”, with both films starring Michael Douglas as Gordon Gekko. Very much the villain in “Wall Street”, Gekko is a somewhat of an antihero in the sequel, as he tries to prove to his daughter that he has reformed after a stint in prison. “Wall Street 2” was directed by Oliver Stone, and featured the last appearance on screen by veteran actor Eli Wallach before his demise in 2014.

Hotmail was introduced in 1996 and was one of the world’s first webmail services. Webmail is an email service in which the emails are stored remotely on a server, rather than on a user’s own computer. Hotmail was acquired by Microsoft in 1997, who replaced it with Outlook.com in 2013.

Yves Saint Laurent (YSL) was a French fashion designer, actually born in Algeria. Saint Laurent started off working as an assistant to Christian Dior at the age of 17. Dior died just four years later, and as a very young man Saint-Laurent was named head of the House of Dior. However, in 1950 Saint Laurent was conscripted into the French Army and ended up in a military hospital after suffering a mental breakdown from the hazing inflicted on him by his fellow soldiers. His treatment included electroshock therapy and administration of sedatives and psychoactive drugs. He was released from hospital, managed to pull his life back together and started his own fashion house. A remarkable story …

A “square meal” is one that is substantial and nourishing. According to some sources, the phrase originated with the Royal Navy, and the square wooden plates on which meals were served. However, this centuries-old practice is an unlikely origin as the phrase is first seen in print in the US, in 1856. An advertisement for a restaurant posted in a California newspaper offers a “square meal” to patrons, in the sense of an “honest, straightforward meal”. The “honest” meaning of “square” was well-established at the time, as in “fair and square”, “square play” and “square deal”.

Oh, how I wish I could cut the cord …

A think tank is a research institute. The use of the term “think tank” dates back to 1959, and apparently was first used to describe the Center for Behavioral Sciences in Palo, Alto, California.

3. Soup with tofu and seaweed : MISO

Miso is the name of the seasoning that makes the soup. Basic miso seasoning is made by fermenting rice, barley and soybeans with salt and a fungus to produce a paste. The paste can be added to stock to make miso soup, or perhaps to flavor tofu.

Étouffée is a Cajun and Creole dish made with shellfish, the most famous version being Crawfish Étouffée. Étouffée is like a thick shellfish stew served over rice. The dish uses the cooking technique known as “smothering” in which the shellfish is cooked in a covered pan over a low heat with a small amount of liquid. “Étouffée” is the French word “stifled, smothered”.

9. Dynasty known for its vases : MING

The Ming Dynasty lasted in China from 1368 to 1644. The Ming Dynasty oversaw tremendous innovation in so many areas, including the manufacture of ceramics. Late in the Ming period, a shift towards a market economy in China led to the export of porcelain on an unprecedented scale, perhaps explaining why we tend to hear more about Ming vases than we do about porcelain from any other Chinese dynasty.

“Silicon Valley” is an HBO comedy about five young entrepreneurs who found a startup called PiedPiper. I haven’t seen this one, but I’ve heard good things …

Genuine batik cloth is produced by applying wax to the parts of the cloth that are not to be dyed. After the cloth has been dyed, it is dried and then dipped in solvent that dissolves the wax.

38. Jimmy of the Daily Planet : OLSEN

Stolichnaya is a brand of “Russian” vodka made from wheat and rye grain. “Stoli” originated in Russia but now it’s made in Latvia. Latvia is of course a completely different country, so you won’t see the word “Russian” on the label anymore.

I must admit, if I ever do order a vodka drink by name, I will order the Absolut brand. I must also admit that I do so from the perspective of an enthusiastic amateur photographer. I’ve been swayed by the Absolut marketing campaign that features such outstanding photographic images.

I consider “dork” to be pretty offensive slang. It originated in the sixties among American students, and has its roots in another slang term, a term for male genitalia.