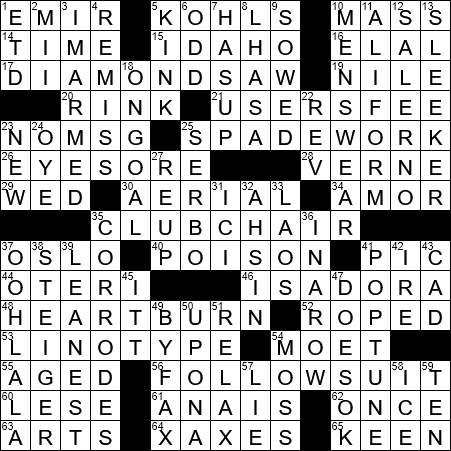 Themed answers start with one of the SUITS in a deck of cards:

Kohl’s is a department store chain with its headquarters in a suburb of Milwaukee, Wisconsin. The store takes its name from the founder, Maxwell Kohl.

In the Christian, the Eucharist is a rite celebrating Christ’s sacrifice, as called out by Jesus at the Last Supper.

Boise, Idaho is the largest metropolitan area in the state by far. There are a number of stories pertaining to the etymology of the name “Boise”. One is that French trappers called the tree-lined river that ran through the area “la rivière boisée”, meaning “the wooded river”.

28. Jules who created the Nautilus : VERNE

Jules Verne really was a groundbreaking author. Verne pioneered the science fiction genre, writing about space, air and underwater travel, long before they were practical and proved feasible. Verne is the second-most translated author of all time, with only Agatha Christie beating him out.

The Jules Verne sci-fi novel “Twenty Thousand Leagues Under the Sea” was first published in 1869-1870 as a serial in a French magazine. Star of the novel (to me) is Captain Nemo’s magnificent submarine called the Nautilus. The “20,000 leagues” in the title is the distance travelled by the Nautilus underwater, and not a depth. 20,000 leagues is about three times the circumference of the Earth.

A “club chair” is a type of armchair that was introduced in France under the name “comfortable chair”. The use of “club” might be a reference to a “gentlemen’s club”, where the chairs became quite common.

Isadora Duncan was an American dancer, inventor of American modern dance. Duncan emphasised the torso in her moves, a break from the balletic tradition of moving from the feet. She left the US when she was 22 years old and moved to Europe around 1900, and from there emigrated to the Soviet Union. Duncan had a tragic passing. She loved to travel in open automobiles wearing a long, flowing scarf. One day her scarf got wrapped around the spokes and axle of the car in which she was travelling, and broke her neck.

“Prilosec” is a brand name for the drug omeprazole. It is a proton-pump inhibitor, meaning that is reduces the production of gastric acid.

Linotype printing was the main technology used in the publication of newspapers and magazines for most of the 20th century, up until the 1970s when it was gradually replaced by offset printing and computer typesetting. Linotype printing was so called as a complete “line of type” was produced at one time.

Moët & Chandon is a French winery, and one of the world’s largest producers of champagne. The company was founded by wine trader Claude Moët in 1743. The name was changed to Moët & Chandon in the 1830s when Pierre-Gabriel Chandon, an in-law to the Moët family, was given co-ownership. Moët & Chandon owns the famous Dom Pérignon brand name, honoring the Benedictine monk who did so much to improve the quality of champagne.

Santana is a Latin rock band from by guitarist Carlos Santana in San Francisco in 1967. Santana’s big break came with a well-received performance at Woodstock in 1969, when the band was completely unknown.

The language known as Serbo-Croatian is the primary language spoken in Serbia, Croatia, Bosnia and Herzegovina, and Montenegro.

“Ah Sin” was a disastrous play written by Bret Harte and Mark Twain. The two writers didn’t get on at all well during the writing process, and when the play was produced for the stage it was very poorly received. Nevertheless, Twain suggested a further collaboration with Harte, and Harte downright refused!

“C’est magnifique!” is French for “It is magnificent!”

Rod Steiger played some powerful roles on the screen, perhaps most memorably the Chief of Police in the 1967 drama “In the Heat of the Night” for which he won a Best Actor Oscar. Steiger was married five times, including a 10-year marriage to fellow actor Claire Bloom. Together Bloom and Steiger had a daughter, the British opera singer Anna Steiger.

“The Pawnbroker” is a 1964 movie adaptation of the novel of the same name by Edward Lewis Wallant. The title character, played by Rod Steiger, is a pawnbroker in East Harlem who is a Holocaust survivor. The film provided Steiger with his big break in movies. And, if you watch carefully you’ll see an extra named Morgan Freeman in his first on-screen appearance.