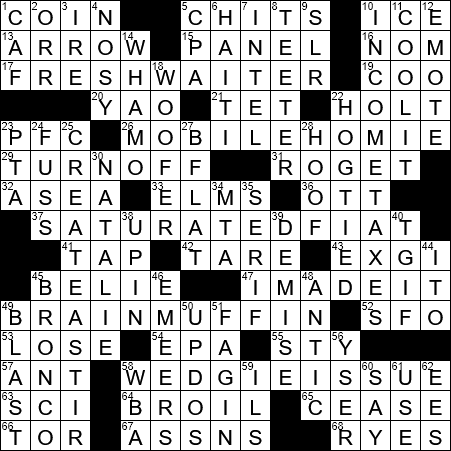 Today’s Theme (according to Bill): I for Insertion

Themed answers are common phrases with a letter I inserted:

The Old English word “cote” was used for a small house. Our modern word “cottage” comes from “cote”. We now use “cote” to mean a small shelter on a farm for sheep or birds.

Lester Holt is a television journalist. When Holt became the permanent anchor of “NBC Nightly News” in 2015, he became the first African-American solo anchor for a daily network news program.

“Homie” is short for “homeboy”, someone from one’s home neighborhood.

31. Creator of many word lists : ROGET

37. European auto left out in the rain? : SATURATED FIAT (from “saturated fat”)

Bachelor of Science (BS or BSc)

The NRA is the National Rifle Association, an organization that has been around since 1871. The NRA has had some celebrity presidents, including US President Ulysses S. Grant. It’s often said that the NRA is the most powerful lobbying group in Washington.

Bobby Orr is regarded as one of the greatest hockey players of all time. By the time he retired in 1978 he had undergone over a dozen knee surgeries. At 31 years of age, he concluded that he just couldn’t skate anymore. Reportedly, he was even having trouble walking. While still 31 years old, in 1979, Orr became the youngest person inducted into the Hockey Hall of Fame.

When Columbus made his famous voyage of discovery, the largest of his three ships was the Santa Maria. The Santa Maria ran aground on the coast of Hispaniola on Christmas Day in 1492 and was lost. 39 of Columbus’s men were left behind with the permission of the locals. These men stripped the timbers from the Santa Maria and used them to build a settlement they called La Navidad (Spanish for “Christmas”). La Navidad is now the modern town of Môle-Saint-Nicolas in the Republic of Haiti.

Hasselblad is a manufacturer of medium-format cameras, headquartered in Gothenburg, Sweden. Famously, Hasselblads were used almost exclusively to take still photographs during the first moon landings.

Wham-O was founded in 1948, with the company’s first product being the Wham-O slingshot. Since then, Wham-O has market a string of hit toys including the Hula Hoop, the Frisbee, the Slip ‘N Slide, Silly String, the Hacky Sack and the Boogie Board.

The hog-tie was first used on pigs (hence the name), and involves the tying together of all four limbs in order to render the animal immobile. On a pig, or any other four legged animal, the limbs are obviously tied in front. To hogtie a human, the hands are usually tied behind the back and joined to a rope binding the ankles.

10,000 Maniacs is a rock band from Jamestown, New York that formed in 1981. Perhaps the most famous former band member is singer-songwriter Natalie Merchant who was the lead vocalist from 1981 until she left in 1993 to pursue her solo career.

M.T.A. was a 1958 hit for the Kingston Trio. The song tells of a man called Charlie who is stuck on board an MTA subway car in Boston. His problem is that “exit fares” had been introduced on the system to supplement “entrance fares” (true story!), and the man didn’t have the extra nickel needed to get off the train. The Massachusetts Bay Transportation Authority (MTBA) started issuing smart cards for use as tickets in 2006, called them “Charlie Cards” in honor of “Charlie on the MTA”.

The Kingston Trio is a folk and pop music group from San Francisco that formed in 1957. The original lineup disbanded in 1967, although there there is a derivative lineup still performing today. The Kingston Trio’s biggest is 1958’s “Tom Dooley”, which was also their first hit.

In Middle English, in the mid-14th century, a mentally deficient man might be referred to as a “Thom Foole”. We retain the old pejorative term in our contemporary word “tomfoolery” meaning “clowning around”.

Fagin is the colorful antagonist in the Charles Dickens novel “Oliver Twist”. Fagin leads a band of children who earn their keep by picking pockets and committing other petty crimes. Fagin’s most successful pickpocket is the Artful Dodger.