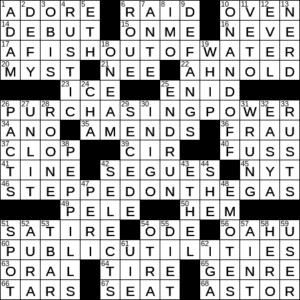 Themed answers each end with a PUBLIC UTILITY:

The 18th Amendment to the US Constitution was a great victory for the temperance movement (the “dry” movement), and in 1919 ushered in the Prohibition era. Highly unpopular (with the “wet” movement), Prohibition was repealed in 1933 by the 21st Amendment.

Neve Campbell is a Canadian actress whose big break in the movies came with the “Scream” horror film series, in which she had a leading role. I don’t do horror films, so I haven’t seen any of the “Scream” movies. Nor have I seen the TV series “Party of Five” that launched the acting careers of both Campbell and Jennifer Love Hewitt in the nineties.

I don’t do horror films, so I haven’t seen any of the “Scream” movies …

Body-builder, actor and politician Arnold Schwarzenegger was born in Graz in Austria, the son of the local police chief. Schwarzenegger’s family name translates into the more prosaic “black plough man”. In his bodybuilding days, he was often referred to as the Austrian Oak. When he was Governor of California he was called “the Governator”, a play on his role in the “The Terminator” series of movies.

“Radius” (plural “radii”) is a Latin word, as one might expect, a word meaning “spoke of a wheel”. Makes sense, huh …?

A lampoon is a parody, a spoof or send-up.

Mary Astor was an American actress who is best remembered perhaps for playing Brigid O’Shaughnessy in 1941’s “The Maltese Falcon” opposite Humphrey Bogart. As well as being an Oscar-winning actress, Mary Astor was also the author of five novels and a best-selling autobiography.

1 Eaton of the Washington Nats : ADAM

Adam Eaton is a professional baseball player who was drafted by the Arizona Diamondbacks in 2010, before signing with the Chicago White Sox in 2014 and then the Washington Nationals in 2017. Eaton often gets confused with another Adam Eaton who played in the majors. The latter is a retired pitcher who played from 2000 to 2009.

Ethiopia is a country in the Horn of Africa. It is the second-most populous nation on the continent (after Nigeria) and, with 90 million inhabitants, the most populous landlocked country in the world. Most anthropologists believe that our Homo sapiens species evolved in the region now called Ethiopia, and from there set out to populate the planet.

“Roue” is a lovely word, but one used to describe a less than lovely man, someone of loose morals. “Roue” comes from the French word “rouer” meaning “to break on a wheel”. This describes the ancient form of capital punishment where a poor soul was lashed to a wheel and then beaten to death with cudgels and bars. I guess the suggestion is that a roue, with his loose morals, deserves such a punishment.

The official birthplace of the incredibly popular poker game of Texas hold ’em is Robstown, Texas where the game dates back to the early 1900s. The game was introduced into Las Vegas in 1967 by a group of Texan enthusiasts including Doyle Brunson, a champion often seen playing on TV today. Doyle Brunson published a poker strategy guide in 1978, and this really helped increase the popularity of the game. But it was the inclusion of Texas hold ‘em in the television lineup that really gave the game its explosive surge in popularity, with the size of the prize money just skyrocketing.

I consider “dork” and “adorkable” to be pretty offensive slang. “Dork” originated in the sixties among American students, and has its roots in another slang term, a term for male genitalia.

Roone Arledge was an executive at ABC. Arledge made a name for himself in sports broadcasting and then took over ABC News in 1977, a position he held until his death in 2002.

Inigo Jones was a British architect, and a native of London. The most famous of Jones’ designs is probably London’s Covent Garden Square.

32 Course that helps your GPA : EASY A

Ethel Merman was an actress and singer, one noted for having a very powerful voice. Merman was married and divorced four times, the last time to the actor Ernest Borgnine, albeit for only 32 days in 1964.

Peri Gilpin is an actress best known for playing Roz Doyle on the hit sitcom “Frasier”. “Frasier” was a spinoff of “Cheers”. Gilpin actually made an appearance on “Cheers”, albeit playing a completely different character.