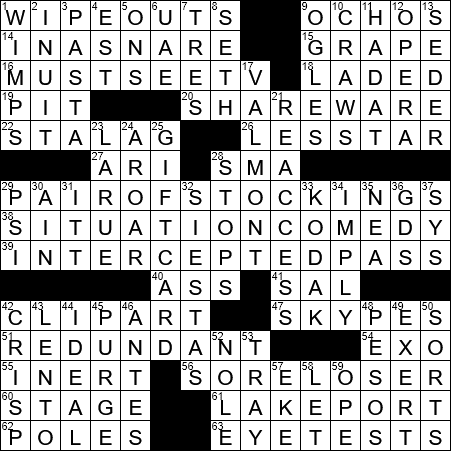 In Spanish, a skater might make figure “ochos” (eights) on the ice.

Concord grapes are mostly used to make grape jelly, and are only occasionally used as table grapes or for making wine. The Concord cultivar was developed in the mid 1800s by Ephraim Wales Bull in Concord, Massachusetts, hence the name.

16. NBC slogan that covered “Hill Street Blues,” among others : MUST SEE TV

“Must See TV” is a slogan that was used by NBC primarily to promote its Thursday night lineup of prime-time shows. The slogan was introduced in the 1990s, and was dropped in the 2000s. The list of shows promoted as “Must See TV” included “Mad About You”, “Seinfeld”, “Frasier”, “L.A. Law”, “ER” and “Friends”.

“Stalag” was the term used for a prisoner-of-war camp in Germany. “Stalag” is an abbreviation for “Stammlager”, which in turn is the short form of” Mannschaft Stamm und Straflager”, literally “crew master and prison camp”.

26. Feature of some lights : LESS TAR

The partially-combusted particulate matter that is produced as a cigarette burns forms a resinous material called “tar”. Cigarette tar is different than the tar used on roads, but is very toxic. Marijuana smoke produces a very similar tar to cigarette smoke, and is just as dangerous.

The phrase “evil villains” is redundant in the sense that the word “evil” is unnecessary because by definition, villains are evil.

Lakeport Brewing is a brewery in Hamilton, Ontario that was founded in 1992. Lakeport has been known as a discount brewer since 2002, when it launched a campaign offering twenty-four beers for twenty-four dollars.

Conceptually, surtitles (also “supertitles”) at say an opera are like subtitles in a film. Translations of the libretto are projected above the stage for the benefit of the audience.

13. Where the same questions are asked annually : SEDER

“Valmont” is a 1989 film starring Colin Firth and Annette Bening that is based on the 1782 novel “Les Liaisons dangereuses”. It’s a sordid tale about a man attempting to corrupt a young girl, all for a bet.

Eva LaRue is a an actress from Long Beach, California. LaRue’s most famous roles were Dr. Maria Santos on the soap “All My Children” and Detective Natalia Boa Vista on “CSI: Miami”. LaRue has a famous third cousin, namely actress Jane Fonda.

The Ain is a river in the east of France that gives its name to the Ain department. The Ain flows into the Rhône not too far from the city of Lyon.

George Eastman founded the Eastman Kodak Company, named after the Kodak camera that he had invented four years earlier. He came up with the name of Kodak after careful consideration. Firstly he was a big fan of the letter “K”, calling it “strong, incisive”. He also wanted a word that was short, easy to pronounce and difficult to mispronounce, and a word that was clearly unique with no prior associations. “Kodak” fit the bill.

Kodak introduced the Brownie camera in 1900, and hence ushered in the era of low-cost photography and snapshots. Brownies went on sale for the princely sum of one dollar. And yes, I had one …

A warehouse (whse.) is usually filled with goods (gds.).

The coin called a peso is used in many Spanish-speaking countries around the world. The coin originated in Spain where the word “peso” means “weight”. The original peso was what we know in English as a “piece of eight”, a silver coin of a specific weight that had a nominal value of eight “reales”.

The Hurricanes (also “Canes”) are the athletics teams of the University of Miami. The school’s mascot is Sebastian the Ibis. “The Ibis” was chosen as the name of the school’s yearbook in 1926, and was adopted as the mascot decades later in the eighties. The ibis was selected by the Hurricanes as the bird is known for its bravery when a hurricane approaches.

Here are some lines spoken by Laertes to Claudius: