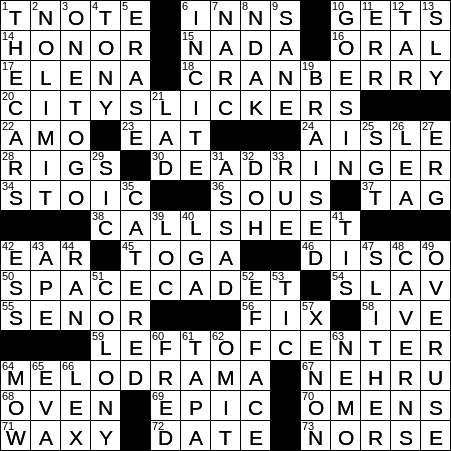 Themed answers each start with a type of CENTER:

A Treasury note (T-note) is a government debt that matures in 1-10 years. A T-note has a coupon (interest) payment made every six months. The T-note is purchased at a discount to face value, and at the date of maturity can be redeemed at that face value. A Treasury bill (T-bill) is a similar financial vehicle, but it matures in one year or less, and a T-bond matures in 20-30 years.

Travelocity is an online travel agency that started doing business in 1996. The company gets a lot of exposure as the sponsor of the US version of the reality show “The Amazing Race”. Travelocity’s mascot, the Roaming Gnome, makes a few appearances on the show.

17 Kagan of the Supreme Court : ELENA

“City Slickers” is an entertaining 1991comedy film starring Billy Crystal and Jack Palance. Palance won the 1992 Oscar for Best Supporting Actor for his performance as crusty old trail boss Curly Washburn. Famously, the 73-year-old actor did a few one-armed push-ups at the ceremony during his acceptance speech.

The daily call sheet is used by the cast and crew making a film as a production schedule. It basically tells everyone when and where they need to report for a day of filming.

The expression “space cadet” is used to describe someone who is eccentric and disconnected with reality. It may even imply that the person is a user of hallucinogens. The phrase has been around since the sixties, and may be derived from the science fiction TV show “Tom Corbett, Space Cadet” which aired in the fifties.

59 Somewhat liberal, or where you might find the first words in the answers to starred clues : LEFT OF CENTER

Tony the Tiger has been the mascot of Frosted Flakes cereal since the product’s introduction in 1951. As Tony would say about Frosted Flakes, “They’re Gr-r-reat!” Well, I thought they were when I was a lot younger …

“Tar Heel” is a nickname for anyone living in, or from, the state of North Carolina. As such, it is the nickname for an athlete of the University of North Carolina (UNC). No one seems to know for sure where the term “Tar Heel” originated, but it is thought to be related to the historical importance of the tar, pitch and turpentine industries that thrived in the state due to the presence of vast forests of pine trees.

The leading letter in the word “scout” is a letter S (ess).

Mambas, and most famously black mambas, are highly venomous snakes that used to be responsible for a great number of fatalities before anti-venoms became available. Mamba venom is a deadly mix of neurotoxins that attack the nervous system and cardiotoxins that attack the heart. A bite, if left untreated, causes the lungs and the heart to shut down.

The element xenon was the first of the noble gases to be made into a compound, which was somewhat remarkable in that the noble gases were thought by many to be completely inert, unreactive.

Fred Astaire’s real name was Frederick Austerlitz. Fred was from Omaha, Nebraska and before he made it big in the movies, he was one half of a celebrated music hall act with his sister Adele. The pair were particularly successful in the UK, and Adele ended up marrying into nobility in England, taking the name Lady Charles Cavendish.

“Training Day” is a 2001 crime movie starring Denzel Washington and Ethan Hawke as two narcotics officers in Los Angeles. The film was well received and merited a TV spin off. The small-screen version was canceled after one season following the death of lead actor Bill Paxton.