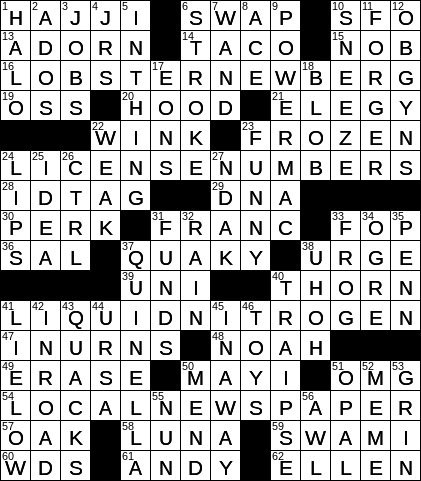 A Haji (also “Hajji”) is the term used for someone who has made a pilgrimage to Mecca, and it is sometimes also used as a form of address for such a person. The journey itself goes by the name “haj” or “hajj”.

Not only is the Swiss Franc legal tender in Switzerland, it is also the money used in Liechtenstein as well as the Italian exclave of Campione d’Italia.

OMG is text-speak for Oh My Gosh! Oh My Goodness! or any other G words you might think of …

“Andy Capp” is a comic strip from Britain that is syndicated internationally. The strip was created by Reg Smythe in 1957 and is still going strong, despite the fact that Smythe passed away in 1998. Andy Capp and his wife Florrie (also “Flo”) are working class characters who live in the northeast of England. Andy is unemployed and Flo works as a charwoman. “Andy Capp” was my favorite comic strip growing up …

Apple Computers was founded in 1976 by Steve Jobs, Steve Wozniak and Ronald Wayne. The company incorporated the following year, but without Wayne. He sold his share of the company back to Jobs and Wozniak, for $800 …

Apple made a line of workstation personal computers called Power Macintosh (and then simply “Power Mac”). The line was introduced in 1994 and last produced in 2006.

ChapStick is a brand name of lip balm owned by Pfizer, although it is so popular that the term tends to be used generically. ChapStick was invented way back in the 1880s by a Dr. Charles Browne Fleet in Lynchburg, Virginia.

A “slush fund” is a sum of money that is held in reserve, or in the case of illicit dealings, that is used for paying bribes.

William Penn was given a huge land grant in America by King Charles II, because the king owed Penn’s father a lot of money. Penn took up residence on this side of the Atlantic and called his new holding “New Wales”. He later changed this name to “Sylvania” (the Latin for “forest”) and finally to “Pennsylvania”.

The bet called a “quinella” is one in which the better must name the first two finishers, but not necessarily in the right order. The term comes from the French word “quine”, the word that also gave us the name of the casino game called Keno.

To win a bet called an exacta (also called a “perfecta”), the person betting must name the horses that finish first and second, and in the exact order. The related bet called the trifecta requires naming of the first, second and third-place finishers in the right order.

The constellation called Ursa Major (Latin for “Larger Bear”) is often just called the Big Dipper because of its resemblance to a ladle or dipper. Ursa Major also resembles a plow, and that’s what we usually call the same constellation back in Ireland, the “plough”.

20. Feature of some sweatshirts : HOOD