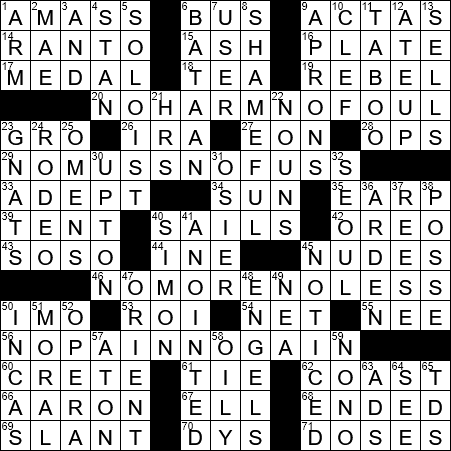 Themed answers are each in the format NO xxxx, NO yyyy:

20. Misdeed exculpation : NO HARM, NO FOUL

“To exculpate” is a such a lovely verb. Meaning “to clear of guilt”, it comes from the Latin “ex culpa” that translates as “from blame”.

29. Done tidily and without stress : NO MUSS, NO FUSS

Bedouin tribes are Arab ethnic groups that predominantly live in the Middle East, in desert areas. Bedouin tribes tend to be nomadic, not settling permanently in one location.

According to the Book of Exodus in the Bible, Moses’ brother Aaron made a golden calf as an idol for the Israelites to worship while Moses was on Mount Sinai receiving the Ten Commandments. When Moses returned, he became angry on seeing the calf and destroyed it.

Dyslexia is a disorder in which a person with normal intelligence has difficulty in reading. The term “dyslexia” comes from the Greek “dys-” meaning “bad” and “lexis” meaning “word”.

“My Little Chickadee” was a catchphrase used by comic actor W. C. Fields. Fields first used it on film in the 1932 movie “If I Had a Million”. Years later in 1940, the phrase was used as the title of a film starring Fields opposite Mae West.

Oliver Hardy was born Norvell Hardy in 1892 in Harlem, Georgia. Hardy used the stage name “Oliver” as a tribute to his father Oliver Hardy. His early performances were credited as “Oliver Norvell Hardy”, and off camera his nickname was “Babe Hardy”. Hardy appeared in several films that also featured the young British actor Stan Laurel, but it wasn’t until 1927 that they teamed up to make perhaps the most famous double act in the history of movies. The Laurel and Hardy act came to an end in 1955. That year, Laurel suffered a stroke, and then later the same year Hardy had a heart attack and stroke from which he never really recovered.

Bataan is a peninsula in the Philippines that is located on the side of Manila Bay opposite to the capital city. In WWII, Bataan was where American and Filipino forces made their last stand before the Japanese took control of the country. The Battle of Bataan lasted three months, at the end of which 75,000 captured prisoners were forced to march from Bataan to various prison camps. It is thought that between 6,000 and 11,000 men died on the march, many from the physical abuse above and beyond the rigors of the 5-6 day march without food or water. For obvious reasons, the 5-6 day trek is referred to as the Bataan Death March.

We use base-10, the decimal system for our numbers. Base-60, the sexagesimal system, was used by the ancient Babylonians. This ancient usage gives rise to our 60 seconds in a minute, and 360 (6 x 60) degrees in a circle.

24. Show with horses and bulls : RODEO

Kate Upton is a fashion model from St. Joseph, Michigan. Kate is a niece of US Representative Fred Upton of Michigan.

Justin Verlander is a professional baseball pitcher who made his MLB debut with the Detroit Tigers in 2015. Verlander was traded to the Astros in 2017, and that same season, the Astros won the World Series. He married the model Kate Upton in 2017.

Most willows (trees and shrubs of the genus Salix) are called just that, “willows”. Some of the broad-leaved shrub varieties are called “sallow”, and the narrow-leaved shrubs are called “osier”. Osier is commonly used in basketry, as osier twigs are very flexible. The strong and flexible willow stems are sometimes referred to as withies.

Richard Wagner was born in the Jewish quarter of Leipzig in 1813. Decades later, Wagner became known not only for writing magnificent music, but also for his anti-semitic views and writings.