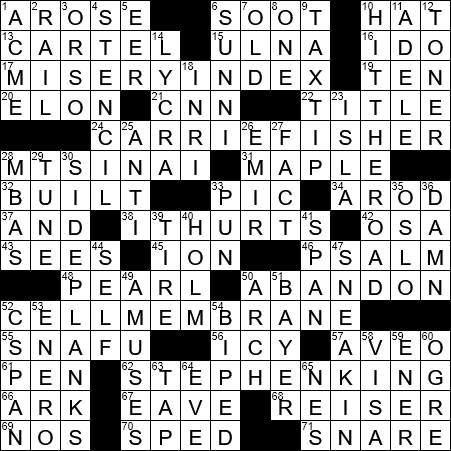 Each of today’s themed answer starts with the title of a novel by Stephen King:

Medicine Hat is a city in Alberta. Canada. Medicine Hat is known for its extensive natural gas fields. In fact, English writer Rudyard Kipling described the city as having “all hell for a basement”.

The 1990 film “Misery” is an adaptation of the Stephen King novel of the same name. I think it’s the only movie of a King book that I’ve watched and enjoyed. I can’t stomach his books, not because of the writing, but because of the gruesome scenes that are part of the plots. The screen version of “Misery” is toned down a little from the original storyline. In the novel, the Kathy Bates character amputates the James Caan character’s foot to incapacitate him. In the movie she just smashes his ankles. Big difference …

Elon Musk is successful businessman who has founded or led some very high-profile companies, namely PayPal, Tesla Motors and SpaceX.

“Inside Politics” is a CNN news program that had an original run of over 20 years. It was hosted by Judy Woodruff from 1993 to 2005, and was resurrected in 2014 with John King as host.

A poet laureate is a poet who is officially pointed by some institution to compose works for special occasions. The US Poet Laureate is more correctly known as the Poet Laureate Consultant in Poetry to the Library of Congress.

The actress Carrie Fisher was best known for playing Princess Leia in the “Star Wars” series of films. Fisher was the daughter of actress Debbie Reynolds and singer Eddie Fisher. Carrie Fisher fell seriously ill on a transatlantic flight at the end of 2016, and then died of cardiac arrest four days later. Famously, her mother and next-door neighbor in Beverly Hills, passed away following a stroke, just one day after her daughter died.

“Postcards from the Edge” is a semi-autobiographical 1987 novel by actress Carrie Fisher that was adapted into a 1990 movie of the same name starring Meryl Streep and Shirley MacLaine.

“Carrie” was Stephen King’s first published novel. The title character is humiliated in a cruel prank during her high school prom in which she ends up covered in the blood of an animal. This trauma leads to a fit rage, with Carrie slaughtering her classmates and the rest of her hometown’s inhabitants.

“It” is a 1986 horror novel penned by Stephen King. The novel was adapted into a 1990 miniseries of the same name.

“Cell” is a 2006 novel by the master of horror Stephen King about people being turned into zombie-like killers when they hear a mysterious signal over their cell phones.

SNAFU is an acronym standing for Situation Normal: All Fouled Up (well, that’s the “polite” version!). As one might perhaps imagine, the term developed in the US Army, during WWII.

Stephen King is a remarkably successful author having sold over 350 million copies of his books, many of which have been made into hit movies. I’ve tried reading two or three, and didn’t get too far. I really don’t do horror …

The comedian and actor Paul Reiser is best known for co-starring alongside Helen Hunt in the nineties sitcom “Mad About You”. Reiser also co-wrote the show’s theme song, “The Final Frontier”.

“Mad About You” is a sitcom from the nineties that stars Paul Reiser and Helen Hunt as a couple living in New York City. Reiser and Hunt did well out of the success of the show, each earning one million dollars per episode for the last season.

What we call spandex in the US is known as lycra in the British Isles. “Spandex” was chosen as the name for the elastic fiber as it is an anagram of “expands”.

In Spanish, there is water (agua) flowing in a river (río) or surrounding an “isla” (island).

According to John Adams:

Facts are stubborn things; and whatever may be our wishes, our inclinations, or the dictates of our passion, they cannot alter the state of facts and evidence.

Adams uttered those words when he was still a lawyer, and while representing the British soldiers who killed five civilians in what came to be known as the Boston Massacre.

English actor Sir Ian Holm is very respected on the stage in the UK, but is better known for his film roles here in the US. Holm played the hobbit Bilbo Baggins in two of the “Lord of the Rings” movies, and he also played the character who turns out be an android in the film “Alien”.

“Chariots of Fire” is British film released in 1981. The movie is based on the true story of two athletes training for and participating in the shorter running events in the 1924 Paris Olympics.

The name Super NES (or SNES) stands for Super Nintendo Entertainment System. Our kids probably have one somewhere …

3. Driving directions qualifier : OR SO

30. Exercises that strengthen obliques : SIDE PLANKS