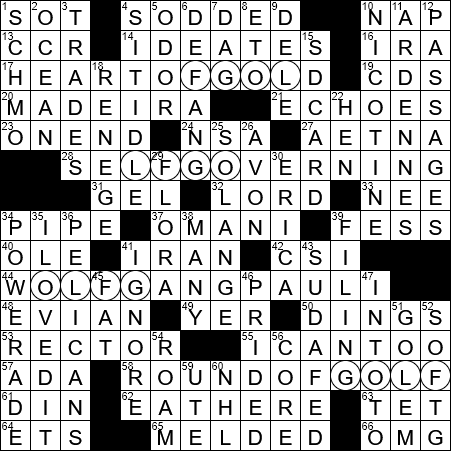 Today’s Reveal Answer: Round of Golf

Themed answers include the string of letters GOLF, with that string moving ROUND by one letter as we progress down the grid:

Edward Snowden is a former NSA contractor who leaked several top secret NSA documents to the media beginning in June 2013. After disclosing his name as the source of the leaks, Snowden tried to seek asylum in Ecuador. While travelling to Ecuador he had a layover in Moscow. While in Moscow, the US government revoked his passport, which effectively left him stranded in the transit area of Moscow Airport. The Russian government eventually granted him annually-renewable temporary asylum.

The health care management company known as Cigna was formed in 1982 by a merger of two insurance companies. One was Connecticut General (CG) and the other Insurance Company of North America (INA).

Ada Lovelace’s real name was Augusta Ada King, Countess of Lovelace. She was the only legitimate child of Lord Byron, the poet. Lovelace was fascinated by mathematics and wrote about the work done by Charles Babbage in building his groundbreaking mechanical computer. In some of her notes, she proposed an algorithm for Babbage’s machine to compute Bernoulli numbers. This algorithm is recognized by many as the world’s first computer program and so Lovelace is sometimes called the first “computer programmer”. There is a computer language called “Ada” that was named in her honor. The Ada language was developed from 1977 to 1983 for the US Department of Defense.

58. Eighteen holes … and a hint to this puzzle’s circled letters : ROUND OF GOLF

“District 9” is a science fiction thriller from South Africa that was released in 2009. The title refers to an internment camp created to house and isolate a crew is sick aliens found aboard a spaceship.

“OMG” is text-speak for “Oh My Gosh!” “Oh My Goodness!” or any other G-words you might think of …

The Indian Ocean is the third largest of the world’s oceans, and accounts for almost 20% of the Earth’s surface. It was named for the country of India, which forms much of the ocean’s northern boundary.

Musk has such an elegant connotation these days because of its use in the world of perfumery. However, its origin is not quite so glamorous. The original substance called musk, also used in perfumes, was extracted from a gland in the rectal area of the male musk deer. The name “musk” is a Sanskrit word for “testicle”.

11. Battle of the Bulge region : ARDENNES

The Ardennes Offensive of WWII is better known as the Battle of the Bulge. The “Bulge” name was coined by the American press, citing the “bulge” in the Allied front lines where the battle took place. US forces suffered more casualties in this engagement than in they did any other battle in the whole war.

Solange Knowles is a singer/songwriter, and the younger sister of the incredibly successful singer Beyoncé. Solange was in the news a while back when security camera footage was released showing her punching and kicking Beyoncé’s husband Jay-Z in an elevator.

The New Orleans Pelicans joined the NBA in 1988 as an expansion team, originally based in Charlotte, North Carolina. The team was going to be called the Charlotte Spirit, but the name was changed following a “name the team” contest run in the local area. During the Revolutionary War, Lord General Cornwallis had referred to Charlotte as a “veritable nest of hornets” due the city’s resistance to British occupation, which explains the local fans’ fondness for the name “Hornets”. The franchise was moved to New Orleans for the 2002 season, as attendance wasn’t big enough to sustain the team in Charlotte. The team had to play two seasons in Oklahoma City due to damage caused by Hurricane Katrina, and played as the New Orleans/Oklahoma City Hornets. After several years back in New Orleans, the franchise was renamed to the Pelicans, a nod to the Brown Pelican that is the Louisiana state bird.

Pseudoephedrine is a drug with decongestant properties, although it is also a stimulant. It is the active ingredient in Sudafed and Mucinex.

51. Clay being of Jewish folklore : GOLEM

“Golem” is Yiddish slang for “dimwit”. In Jewish folklore, a golem is an anthropomorphic being made out of inanimate matter, and is somewhat like an unintelligent robot.

The word “geometry” starts with a soft letter G (gee).