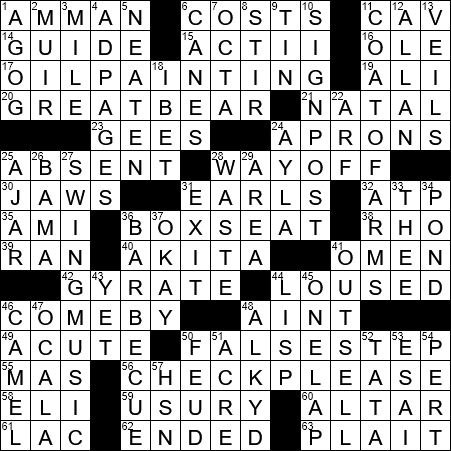 Themed answers all start with something that can be CHECKED:

Act II is a brand of popcorn that is marketed as having a taste and appearance that is similar to popcorn that we can buy at movie theaters.

There are a couple of letters G (gees) in the word “gags”.

“To louse up” is a slang verb phrase meaning “to spoil, botch”.

2010’s “The Book of Eli” is one of those “end of the world” movies, with Denzel Washington playing a tough guy traveling across what is left of the United States after some apocryphal event.

“Usury” was originally the name given to the practice of simply lending money at interest, but the term now refers to lending at rates of interest that are excessive.

“Fond du lac” is French and translates as “bottom of the lake”, an apt name for the city of Fond du Lac, Wisconsin located at the foot of Lake Winnebago. If you like to play the lottery, you might want to stop off in Fond du Lac as there is a stretch of South Main Street called “Miracle Mile”. Back in 1993, someone bought a ticket there and won $100 million. Then in 2006, another store sold a ticket that won $209 million. These things always come in threes, so buy your tickets now …

John Muir was a famous American naturalist, although he was born in Scotland. Muir founded the Sierra Club in 1892. He published “My First Summer in the Sierra” in 1911, which described one of Muir’s favorite places in the country, the Sierra Nevada range in California.

Fitbits are wearable activity trackers that are mainly used to track the number of steps walked. Fitbit Inc. was founded in 2007 in San Francisco.

The celebrated American writer Edgar Allan Poe was born “Edgar Poe” in 1809 in Boston. Poe’s father abandoned Edgar and his two siblings after the death of their mother. As a result, Edgar was taken into the home of the Allan family in Richmond Virginia. His foster parents gave the future author the name “Edgar Allan Poe”.

Ayla is a little Cro-Magnon girl who is orphaned and then adopted by a Neanderthal tribe, as told in “The Clan of the Cave Bear”, the first of a series of novels written by Jean Auel that set in prehistoric times. I haven’t read any of Auel’s books myself, but they are on my reading to-do list as my wife recommends them. They sound interesting …

The distance around a newer running track is 400 meters, as measured in the inside lane. Tracks used to be 440 yards around, so that four laps added up to an even mile (1,760 yards). As race distances changed to meters, the mile race was dropped in favor of the “metric mile”, 1600 meters, which is equivalent to 1,750 yards or 0.994 miles.

The dromedary, also known as the Arabian Camel or Indian Camel, is the camel that has only one hump. The other species of camel is the Bactrian, which has two humps. The hump of a dromedary contains up to 80 pounds of fat, which can be broken down into water and energy if no food or water is available.

Ocala National Forest is a large protected area covering over 600 square miles of Central Florida. Included in the bounds of the forest is the US Navy’s Pinecastle Bombing Range. Navy planes drop about 20,000 bombs annually at Pinecastle, although only a few hundred are live munitions.

48. Binder for some paints : ALKYD

“Feud” is a TV series that dramatizes actual events in celebrity feuds. The first season debuted in 2017 and explored the rivalry of Hollywood superstars Bette Davis and Joan Crawford (portrayed by Susan Sarandon and Jessica Lange). A second season takes on the relationship between Charles and Diana, the Prince and Princess of Wales.

The QVC shopping channel was founded in 1986 in West Chester, Pennsylvania. The company now has operations not only in the US but also in the UK, Germany, Japan and Italy. That means QVC is reaching 200 million households. The QVC initialism stands for Quality, Value and Convenience.