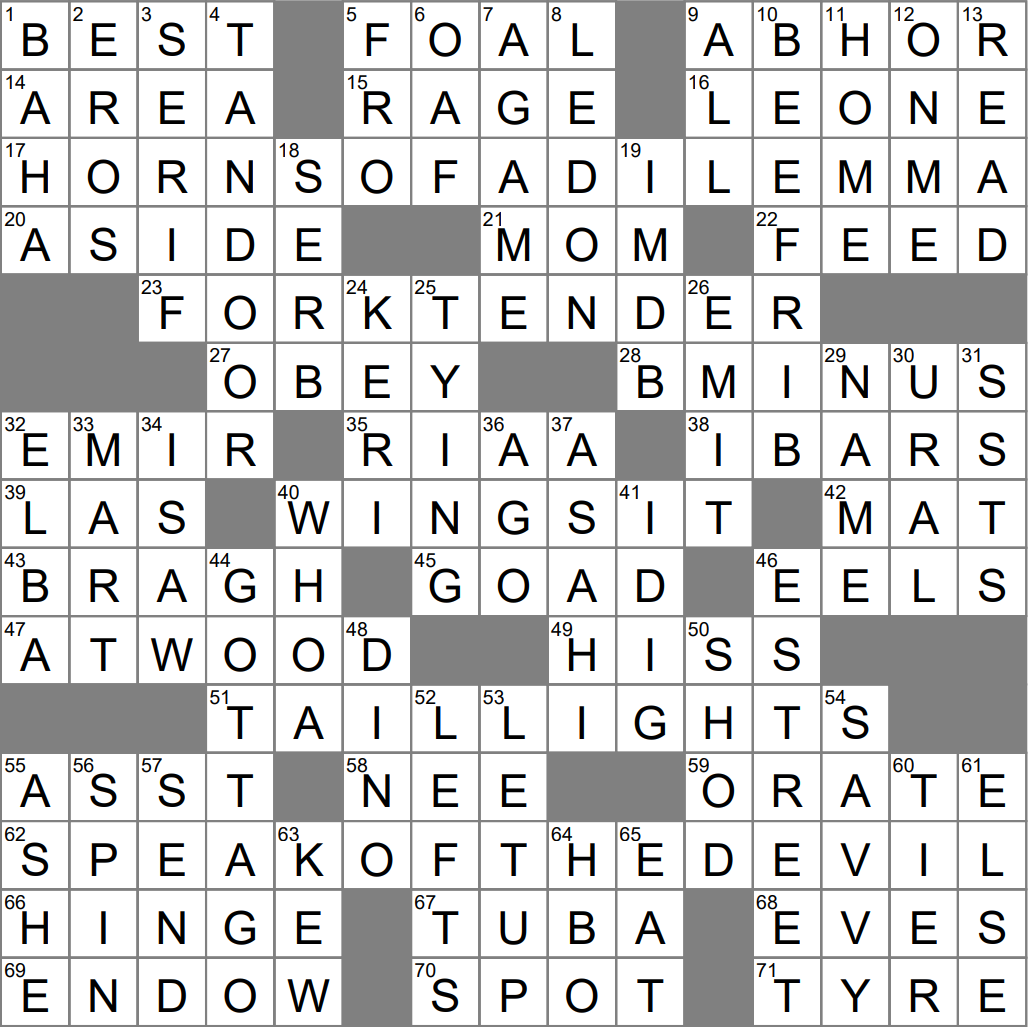 Themed answers each start with a feature OF THE DEVIL:

A lemma is a helping theorem, a subsidiary proposition that helps prove some other proposition. A problem offering two equally acceptable (or unacceptable) possibilities might be described as a “double lemma”, and hence our term “dilemma”. To be on the horns of a dilemma is to be faced with two equally unattractive choices. The suggestion is that one is faced with a “horned” argument, meaning that if you avoid the horn of one choice, you will get impaled on the other.

35 Org. that certifies albums as gold or platinum : RIAA

The Recording Industry Association of America (RIAA) represents music distributors. It is the RIAA that certifies records that have gone gold and platinum i.e. reached fixed sales thresholds. It’s also the RIAA that goes after individuals who share music illegally online.

The Las Vegas Raiders football team was founded in 1960, and was originally intended to play in Minnesota. Instead, the team played in Oakland from 1960 to 1981 and then spent 12 years in Los Angeles before returning to Oakland in 1995. In 2017, the Raiders announced their plan to relocate to Las Vegas starting in 2020.

“Erin go bragh!” is an anglicization of the Irish phrase “Éirinn go brách!”, which translates as “Ireland forever!”

Canadian author Margaret Atwood is best known for her novels. However, Atwood also conceived the idea of the LongPen, a remote robotic writing technology. The LongPen allows a user to write remotely in ink via the Internet. Atwood came up with the idea so that she could remotely attend book signings.

62 “We were just talking about you!” and a hint to the first words of the answers to the starred clues : SPEAK OF THE DEVIL

Whitehall is the main thoroughfare running from Trafalgar Square towards Parliament Square in London. The street is home to many government buildings, including the British Cabinet Office. It is because of this association that the term “Whitehall” has become a metonym for the British Government.

The Internet Movie Database (IMDb) website was launched in 1990, and is now owned by Amazon.com. It’s a great site for answering questions one has about movies and actors.

I visited Gettysburg for the first time in 2010, and goodness me what a moving place that is. As I discovered on my visit, there are five known copies of Lincoln’s Gettysburg address and all of them differ in some way or another, so I suppose the exact words spoken will never be known. Martin Luther King Jr. evoked Abraham Lincoln’s words in another of America’s iconic addresses, his “I Have a Dream” speech. Lincoln’s speech began with “Four score and seven years ago …”, and King’s speech began with “Five score years ago …” as a nod to the Gettysburg Address.

Asahi is a Japanese beer, and the brewery that produces it. “Asahi” is Japanese for “morning sun”. Asahi introduced a “dry beer” in 1987, igniting a craze that rocketed the brewery to the number one spot in terms of beer production in Japan, with Sapporo close behind.

The “House of the Dragon” fantasy TV series serves as a prequel to the TV show “Game of Thrones”. Both shows are adaptations of the “A Song of Ice and Fire” novels by George R. R. Martin. Due to the success of “Game of Thrones”, expectations were high for “House of the Dragon”. The premiere episode of the latter was really well received by audiences, and so it took just five days for HBO to decide to renew “House of Dragons” for a second season.