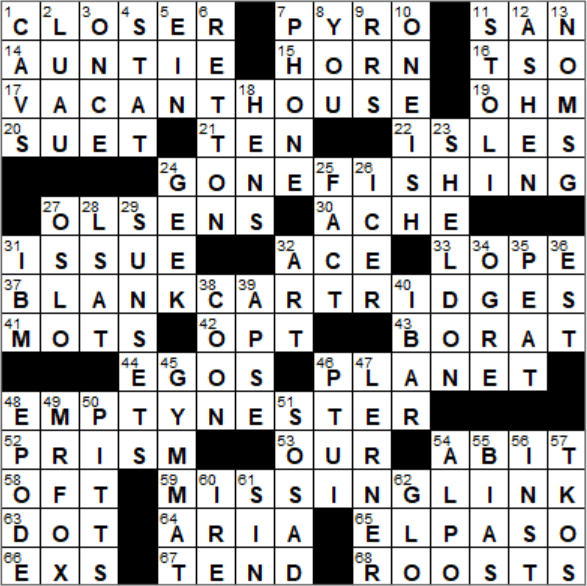 Themed answers start with a synonym of “void, unfilled”:

San Jose is the third-largest city in California and is located at the heart of Silicon Valley. The city was founded by the Spanish in 1777 and named El Pueblo de San José de Guadalupe. Under Spanish and Mexican rule, the territory of Alta California had its capital in Monterey. When California was made a US state, San Jose was named as the first capital, in 1850. Subsequently, the state legislature met in Vallejo in 1852, Benicia in 1853, and finally settled in Sacramento.

I know very little about the Olsen twins, but I am told that folks believe Mary-Kate and Ashley to be identical twins. They look very much alike, but are in fact fraternal twins. The sisters were cast as Michelle Tanner on the eighties sitcom “Full House”, taking turns playing the role.

When light passes through a prism, it splits up (“disperses”) into differing wavelengths. It then becomes clear that white light is actually a mixture of different colors, which show up as beautiful spectra.

The marvelous series of “Our Gang” comedy short films was also known as “The Little Rascals”. The series was produced by Hal Roach starting in 1922, and running up until 1944. There were 220 “Our Gang” film shorts made in all, and one feature film title “General Spanky” released in 1936.

The Hawaiian party or feast known as a “luau” really dates back to 1819, when King Kamehameha II removed religious laws that governed the eating of meals. These laws called for women and men to eat separately. At the same times as he changed the laws, the king initiated the luau tradition by symbolically eating with the women who moved in his circle.

Waikiki is a neighborhood of Honolulu, and home to the famous Waikiki Beach. The name “Waikiki” means “spouting fresh water” in Hawaiian.

The title of Richard Strauss’ tone poem “Ein Heldenleben” translates into English as “A Hero’s Life”.

Stolichnaya is a brand of “Russian” vodka made from wheat and rye grain. “Stoli” originated in Russia but now it’s made in Latvia. Latvia is of course a completely different country, so you won’t see the word “Russian” on the label.

The Old English word “cypa”, meaning “basket”, evolved in the 14th century to the word “coop” to describe a small cage for poultry. And, we still use that word today.

Many whiskies are noted for a peaty, smoky flavor. That taste is introduced when the malted grain is dried over a peat-heated fire.

George Bernard Shaw’s play “Pygmalion” was adapted by Lerner and Loewe to become the Broadway musical “My Fair Lady”. The musical spun off the wonderful 1964 film of the same name starring Audrey Hepburn and Rex Harrison. To cockney Eliza Doolittle, Professor Henry Higgins was “‘Enry ‘Iggins”.

Leonard Pitts is nationally syndicated columnist and novelist. Pitts was first nominated for a Pulitzer in 1993, and won in 2004.