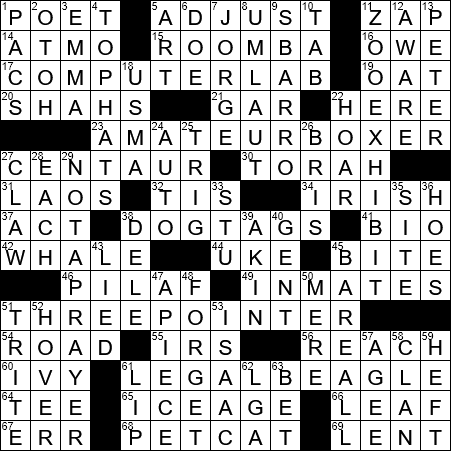 Themed answers end with a breed of DOG:

Mary Oliver is a writer, mainly of petry, who has been described as America’s best-selling poet. Oliver won a Pulitzer for poetry in 1984 for her collection of poems called “American Primitive”.

“Shah” was a title used by Persian emperors that translate into English as “king”. The full title in Persian is “Sahahsah”, which means “King of Kings”.

31. Country between Vietnam and Thailand : LAOS

34. Type of coffee or whiskey : IRISH

The identification tags worn by soldiers are often called “dog tags”, simply because they do resemble tags worn by dogs. US military personnel are required to wear dog tags when in the field. Each soldier wears either two tags or a special tag that breaks easily into two identical pieces. The idea is that if a soldier is killed then one half can be removed for notification and the remaining half stays with the body. Each tag contains basics such as name and ID number, medical information like blood type, and possibly a religious preference.

The species of flowering plant Hedera helix is variously referred to as common ivy, English ivy, or usually just plain “ivy”. “Hedera” is the generic term for “ivy”, and “helix” is Greek for “spiral, twist, turn”.

Jorge Ramos is perhaps the best-known Spanish-language news anchor working in the US. Ramos is based in Miami, where he anchors Univision’s flagship daily news program “Noticias Univision”. Ramos has held that position since 1987.

8. Two dots above a vowel : UMLAUT

An “umlaut” (also “diaeresis”) is a diacritical mark consisting of two horizontal dots placed over a letter, usually a vowel. Here in the West, we are perhaps most familiar with umlauts in German, as in “Schön”.

“Madagascar!” is an exhibit that opened in 2008 in the Bronx Zoo in New York City. The exhibit houses several forms of wildlife that are native to the island of Madagascar, including lemurs, Nile crocodiles and radiated tortoises. There are also over 100,000 hissing cockroaches in the exhibit, and you can actually name one for a few bucks on Valentine’s Day. Romantic …

“On, Brave Old Army Team” is the fight song of the US Military Academy (USMA). The director of the West Point Band, Phili Egner, composed the song in 1910. You can see the first seven notes of the song’s chorus etched into Egner’s tombstone in the West Point Cemetery.

Auto-Tune is a proprietary audio process that is primarily used to alter pitch in a recorded track. One of the main uses of Auto-Tune is to correct voice tracks that are slightly off-pitch, which probably explains why even professional singers tend to sound better on a recording than they do live. More extreme levels of Auto-Tune adjustment are now quite common, creating a sound effect that distorts vocals. Such sound effects really took off with the release of Cher’s 1998 hit song “Believe”, in which you can really notice the vocal distortion.

Oscar Isaac is an actor from Guatemala who was raised in Miami. Before acting, Isaac played lead guitar in his own band, called the Blinking Underdogs. Isaac plays X-wing pilot Poe Dameron in the “Star Wars” sequel trilogy of movies.