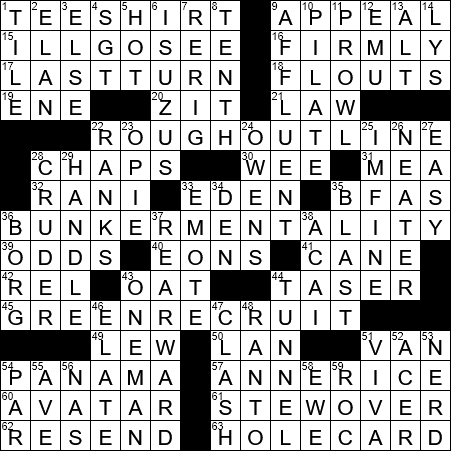 Today’s Theme (according to Bill): Up to Par

By taking the starting word in each themed answer in turn, we end up with locations our ball might be on a golf course, on the way to scoring PAR:

Milwaukee sits on the western shore of Lake Michigan, and is the largest city in the state of Wisconsin. Milwaukee has a long tradition of brewing, a tradition that dates back to the 1850s and that is associated with the large number of German immigrants that started to arrive in the area during the 1840s. Even though the city was once home to four of the world’s largest breweries, namely Schlitz, Blatz, Pabst and Miller, only the latter is a major employer in Milwaukee today.

Chaps are leather leggings that are worn when riding a horse. The purpose of the garment is provide protection for the legs when riding through bushy terrain, perhaps a heavy thicket. The name “chaps” comes from the Spanish name for the leggings, which is “chaparejos” or “chaparreras”. The Spanish term comes from chaparro, a Spanish word that can be used for a low-growing thicket.

The Panama Canal was predated by the Panama Railway. The railway route actually determined the eventual route of the canal. The impetus to build a canal was spurred on by the success of the Suez Canal which opened in 1869. Work on the Panama Canal started in 1881, but things did not go smoothly at all. Companies involved in the project went bankrupt, one after the other. Eventually the US government bought its way into the project with President Roosevelt handing over millions of dollars to the country of Panama. The canal was finally completed in 1914. All in all, about 27,500 workers died during construction. A kind blog reader highly recommends the book “The Path Between the Seas” by David McCullough, should anyone want to read more about the fascinating tale of Panama Canal’s construction.

“Lives of the Mayfair Witches” is a trilogy of books penned by gothic fiction writer Anne Rice. The titles in the series are:

Stud poker is the name given to many variants of poker, all of which are characterized by the dealer giving each player a mix of cards face-down and face-up. The cards facing upwards are called “upcards”. The cards facing downwards are called “hole cards”, cards only visible to the individual who holds that particular hand. This gives rise to the phrase “ace in the hole”, a valuable holding that only the player with the ace is aware of.

5. High on the Scoville scale : HOT

The Scoville scale is a measure of the spiciness of chili peppers. The scale was invented by a pharmacist in 1912, Wilbur Scoville. To determine the position of a pepper on Scoville scale, the amount of capsaicin in the chili is measured. Capsaicin is an irritant that causes the sensation of burning when it comes into contact with tissue, particularly the mucous membranes.

The Rodeo is a compact SUV that was produced by Isuzu for the North American market. At the same time, the Isuzu Rodeo name was used on compact pickup trucks sold in Japan.

According to the Gospel of John, when Pilate presented a scourged and beaten Jesus to the crowd he used the words “Ecce homo”, Latin for “Behold the man”.

Terrell “T.O.” Owens is a retired NFL player. Owens was known for some pretty flamboyant celebrations after he scored touchdowns. A few of those celebrations earned him fines from the NFL.

VIVA is a Kimberly-Clark brand of paper towels.

The mythical roc is a huge bird of prey, one reputedly able to carry off and eat elephants. The roc was said to come from the Indian subcontinent. The supposed existence of the roc was promulgated by Marco Polo in the accounts that he published of his travels through Asia.