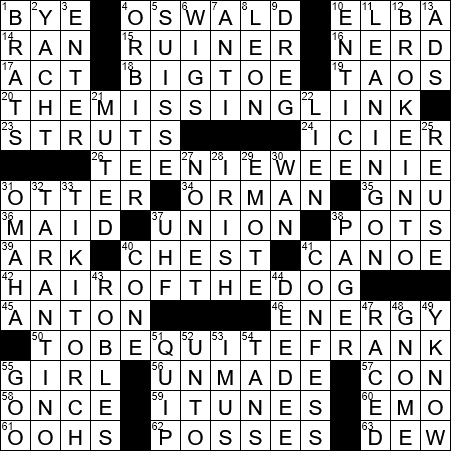 Each of today’s themed answers ends with a type of sausage, a relative of a BRAT:

Lee Harvey Oswald was the assassin who killed President John F. Kennedy in Dallas on November 22, 1963. Oswald served with the US Marines from 1956 until 1959. One month after leaving the military, Oswald traveled to the Soviet Union via a circuitous route across the Atlantic and Europe. He entered the Soviet Union on a visa that was only valid for one week, but once in the country he made it clear that he wanted to stay. Oswald settled in Minsk for a few years, working there as a lathe operator and living in government-subsidized housing. In 1961, Oswald married a 19-year-old Russian student and the couple had a baby girl a year later. Oswald grew tired of life in Russia though, so he and his new family moved to the US in 1962, settling in the Dallas area. Oswald’s widow still lives in Texas.

Napoléon Bonaparte was a military professional from Corsica who rose to prominence after the French Revolution during the French First Republic. He took over the country in 1799 in a coup d’état and installed himself as First Consul. Soon after, he led France in the Napoleonic Wars, conflicts between the growing French Empire and a series of opposing coalitions. He was eventually defeated at the Battle of Leipzig and was forced into exile on the Italian island of Elba off the Tuscan coast. Napoleon escaped in 1815 and regained power, only to be finally defeated a few months later at the Battle of Waterloo. The British dispatched him to the island of Saint Helena in the South Atlantic where he lived out the last six years of his life as a prisoner.

The Piltdown Man hoax is the most famous deception in the world of paleontology. The hoax played out in 1912 when a Charles Dawson announced that he had a skull fragment that was discovered at a gravel pit near the village of Piltdown in East Sussex in England. Most of the scientific community believed this was the fossilized remains of a form of man unknown up to that point. It was forty years later when it was determined that the skull fragment was in fact a composite of a medieval human skull, a 500-year old orangutan and some fossilized chimpanzee teeth. No one is really sure who pulled off the hoax, but I believe the police are looking at the usual suspects …

26. Really skimpy, like the polka-dot bikini of song : TEENIE-WEENIE

42. Hangover remedy, so they say : HAIR OF THE DOG

Credit Suisse is a financial services company that was founded in 1856 by one Alfred Escher. The original purpose of Credit Suisse (then known as the “Swiss Credit Institution”) was to fund the buildout of the Swiss rail network.

“When Irish Eyes Are Smiling” is an American song of tribute to Ireland that dates back to 1912. The lyrics were written by Chauncey Olcott and George Graff, Jr., and the tune was composed by Ernest Ball.

A tiki torch is a bamboo torch that’s very commonly used in Tiki culture. Tiki culture is a relatively modern invention dating from the 20th century, and is the experience created in Polynesian-style restaurants. The word “Tiki” is borrowed from Polynesia.

Dee Dee Myers was a very capable White House Press Secretary in the first two years of the Clinton administration, and was the first woman to hold that post. After leaving the White House, Myers acted as a consultant on the TV show “The West Wing”, and I am sure helped add that touch of authenticity to a great television program.