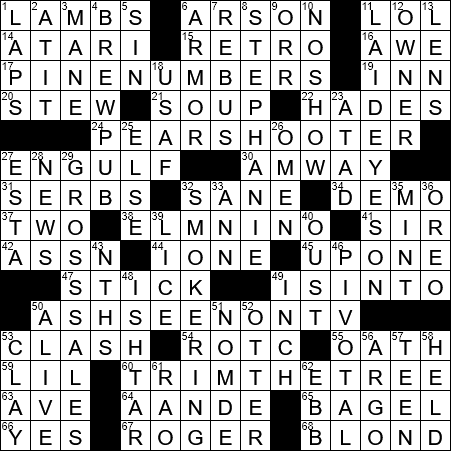 Themed answers start with a type of TREE. When we TRIM THE last letter from that TREE, we get a common phrase:

24 One trying to photograph a partridge during the holidays? : PEAR SHOOTER (trims to “peashooter”)

Founded in 1959, Amway is still going strong. It is one of the largest privately-held companies in the United States, with sales of around $8 billion and about 13,000 employees. The name “Amway” is short for “American Way”.

When the surface temperature of much of the Pacific Ocean rises more than half a degree centigrade, then there is said to be an El Niño episode. That small temperature change in the Pacific has been associated with climatic changes that can stretch right across the globe. El Niño is Spanish for “the boy” and is a reference to the Christ child. The phenomenon was given this particular Spanish name because the warming is usually noticed near South America and around Christmas-time.

The Rolling Stones lead singer’s full name is Sir Michael Philip Jagger. “Mick” was knighted for his services to popular music in 2003.

A lacrosse stick is also known as a “crosse”.

“Idiot box” and “boob tube” are nicknames for television.

Lil Jon is a rapper from Atlanta whose real name is Jonathan Mortimer Smith. Smith adopted his stage name early in his career, when collaborating with Big Sam and Lil’ Bo.

60 Do some holiday decorating … and what you need to do to four puzzle answers to produce familiar phrases? : TRIM THE TREE

Stephanie Zimbalist is an actress who is best known for playing the female lead on the 1980’s detective show “Remington Steele”. Stephanie is the daughter of actor Efrem Zimbalist Jr., who starred in the TV shows “77 Sunset Strip” and “The F.B.I.”

18 Its Space Command has HQ in Colorado : USAF

Peterson Air Force Base in Colorado Springs is the headquarters of the US Air Force Space Command.

In a financial statement, “net sales” are “gross sales” net of customer discounts, customer returns and sales allowances paid if a product proves to be defective.

Raggedy Ann is a rag doll that was created by Johnny Gruelle in 1915 for his daughter, Marcella. He decided to name the doll by combining the titles of two poems by James Whitcomb Riley, “The Raggedy Man” and “Little Orphan Annie”. Gruelle introduced Raggedy Ann in a series of books three years later. Sadly, Marcella died at 13 years of age with her father blaming a smallpox vaccination she was given at school. Gruelle became very active in the movement against mass vaccination, for which Raggedy Ann became a symbol.

In Greek mythology, Colchis was a wealthy land located at the edge of the world. It was in Colchis that Jason and the Argonauts found the Golden Fleece.

P. V. Narasimha Rao was Prime Minister of India from 1991 to 1996. Rao is seen by most as the leader who transformed his country’s economy into the market-driven engine that it is today.