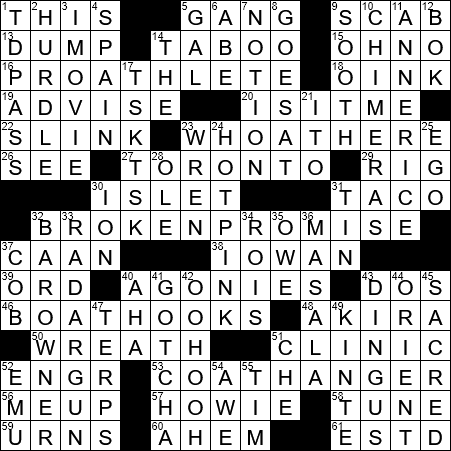 Themed answers each include the word OATH. That PROMISE/OATH is BROKEN up between the end of the first word and the start of the second:

James Caan is an actor from The Bronx, New York City. He is noted for his appearances in some very big movies such as “The Godfather”, “Misery”, “A Bridge Too Far”, “Rollerball” and more recently “Elf”. Caan is quite the sportsman. He plays golf with an 8 handicap, and is a 6-Dan Black Belt Master of Gosoku Karate.

President Herbert Hoover was born in West Branch, Iowa, and is the only president to have been born in that state. His birthplace is now a National Landmark, and he and his wife were buried in the grounds of the Herbert Hoover Presidential Library and Museum in West Branch. President Hoover died at the age of 90 years old in 1964, outliving his nemesis Franklin Delano Roosevelt by almost 20 years.

“Rashomon” is a period drama film directed by Akira Kurosawa that was released in 1950. “Rashomon” was the movie that first introduced Kurosawa to western audiences. The film’s title refers to the huge gate to the city of Kyoto.

“Start Me Up” is a song by Keith Richards and Mick Jagger that was recorded by the Rolling Stones in 1981. The Stones often uses “Start Me Up” to open their concerts.

Howie Mandel is a Canadian comic. He was a regular on TV a few years ago as host of “Deal or No Deal”, and more recently as a judge on “America’s Got Talent”. I remember Mandel from “St. Elsewhere” in the eighties, which was the first American TV show that I watched regularly when I moved to the US …

iMovie is a video editing program published by Apple and distributed free with many of its products.

A “soothsayer” is someone who claims to have the ability to predict the future. The term comes from “sooth”, an archaic word for “truth”. So a soothsayer was supposedly one who told the “truth” (about the future).

Hello Kitty is a female bobtail cat, and a character and brand name launched in 1974 by the Japanese company Sanrio. Folks can overpay for stationary, school supplies and fashion accessories with the Hello Kitty character emblazoned thereon.

Versailles is a city located just 10 miles from the center of Paris. It is famous as home to the magnificent Palace of Versailles. The palace started out as a hunting lodge built in the village of Versailles in 1624, built for Louis XIII. Louis XIII extended the lodge into a full-blown château, but it was Louis XIV who expanded it into one of the largest palaces on the planet. Louis XIV moved the royal court from Paris to Versailles starting in 1678.

A sacred cow is something that is immune from criticism or questioning. The phrase alludes to the reverence for cows in the Hindu tradition. The use of figurative idiom seems to have originated in the late 1800s in the US.

Comedy actor Tim Conway is best known in front of the TV camera for playing Ensign Parker in “McHale’s Navy” and for co-starring on “The Carol Burnett Show”. Our younger friends might be more familiar with Conway as the voice behind Barnacle Boy on “SpongeBob SquarePants”.