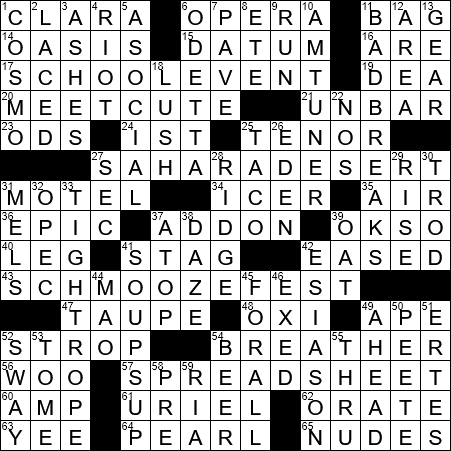 The letters S-H-E-E-T are SPREAD throughout each of today’s themed answers:

6. Work with a libretto : OPERA

“Narcos” is a Netflix show that deals with the Drug Enforcement Agency’s battles against drug cartels. The first two seasons focus on the rise and fall of drug lord Pablo Escobar of the Medellín Cartel, and is set and filmed in Colombia.

The term “motel” is a portmanteau of “motor” and “hotel”.

43. Gathering with much networking : SCHMOOZEFEST

OxiClean is a bleaching agent and cleaner that was famously marketed using infomercials that featured the late Billy Mays.

61. Angel who directs Satan to Earth in “Paradise Lost” : URIEL

Like so many famous cocktails, the actual origins of the cosmopolitan are disputed. It is a nice drink. One of the standard recipes is 4 parts citrus vodka, 1.5 parts Cointreau, 1.5 parts lime juice and 3 parts cranberry juice.

Back in the 1600s, the word “gregarious” applied to animals and meant “disposed to live in flocks”. The root word is the Latin “grex” meaning “flock, herd”. I guess the idea is that a gregarious creature plays nice with others.

8. Saison that starts in juin : ETE

In French, the season of “été” (summer) starts in “juin” (June). Note that the names of months are not capitalized in French.

The Blue Ridge Mountains are part of the Appalachian Mountains in the eastern US. The range is noted for the bluish colors of the peaks. The blue hue is actually caused by the emission of an organic compound called isoprene into the atmosphere. The isoprene contributes to the blue haze that covers mountain ranges.

42. Co-host of the sports radio show “Boomer and Gio” : ESIASON

“Boomer and Carton” was a morning drivetime sports program that ran from 2007 until 2017. The show was hosted by retired quarterback Boomer Esiason and radio personality Craig Carton. The partnership ended when Carton was arrested and convicted of crimes related to a Ponzi scheme that he ran promising concert tickets to investors. After a brief stint hosting the show by himself and with guest co-hosts, Esiason then paired up with radio host Gregg Giannotti and the show was rebranded at the end of 2017 as “Boomer and Gio”.

45. Last words of the Pledge of Allegiance : … FOR ALL

The Pledge of Allegiance of the US was composed by Francis Bellamy in 1892 and was adopted by Congress in 1942. The actual words used in the pledge have changed over time. Here is the original 1892 version shown in comparison to the current version that was adopted in 1954:

1892: I pledge allegiance to my flag and the republic for which it stands: one nation indivisible with liberty and justice for all.

1954: I pledge allegiance to the flag of the United States of America, and to the republic for which it stands, one nation under God, indivisible, with liberty and justice for all.