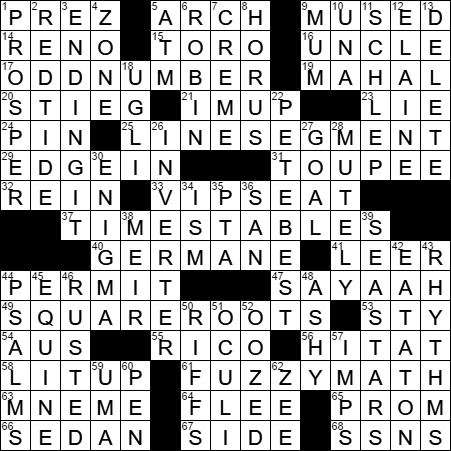 Today’s themed answers are terms from the world of MATH. The twist is that we have some FUZZY, pun-like clues pointing to each term:

In our Irish clan, that would be the matriarch …

Janet Reno was Attorney General of the US from 1993 to 2001. Reno was the person to hold the office second longest, and was our first female Attorney General. In 2002, Reno ran for Governor of Florida but failed to win the Democratic nomination. Thereafter she retired from public life, passing away at the end of 2016.

The term “entr’acte” comes to us from French, and is the interval “between two acts” (“entre deux actes”) of a theatrical performance. The term often describes some entertainment provided during that interval.

Stieg Larsson was a Swedish journalist and writer, and indeed one of his main characters in his “Millennium” series of novels is a journalist as well. The first two titles in the series are “The Girl with the Dragon Tattoo” and “The Girl Who Played with Fire”. The last of the three titles in the Millennium series is “The Girl Who Kicked the Hornet’s Nest”, which was the most-sold book in the US in 2010. All of the books in the series were published after Larsson’s death. He passed away from a heart attack while climbing several flights of stairs, when he was just 50 years old.

Something that is “germane” is relevant. “Germane” originally meant “having the same parents”, but it was used more figuratively as “on topic” by William Shakespeare in “Hamlet”. And that’s the way we’ve been using it ever since “Hamlet” was first performed in the 1600s.

Sigmund Freud was an Austrian neurologist, and founder of the psychoanalytic school of psychiatry. One of Freud’s tenets was that our dreams are a necessary part of sleep as they prevent the dreamer from awakening due to desire for unfulfilled wishes. The dream’s content represents those unfulfilled wishes and satisfies the desire.

The derogatory phrase “fuzzy math” was first used in the debates leading up the 2000 presidential election. Future president George W. Bush used the term to describe figures presented by his opponent Al Gore.

An algal bloom that takes on a red or brown color is commonly referred to as “red tide”. The algae causing the bloom are phytoplankton containing photosynthetic pigments that give the red/brown color. Some red tides are extremely harmful to marine life as there can be a depletion of oxygen dissolved in the seawater. The algae can also contain natural toxins that can kill those creatures that eat it.

The expression “Dear John letter” originated in WWII among American troops who were serving abroad. The servicemen highly valued letters from girlfriends and wives back home, and almost invariably those missives started out with “Dearest”, or “My Darling” or some other expression of affection. A curt, “Dear John” set the tone for a letter which was likely to contain news of a new love interest in the life of the girlfriend or wife. The contemporary equivalent missive from a male to a female is a “Dear Jane letter”.

Robin Hood is a figure from English folklore, celebrated in story and song. Some stories suggest that Robin Hood the outlaw was actually a real nobleman, the Earl of Huntington. Robin Hood’s famous companion was Maid Marian. Interestingly, the legend of Maid Marian (full name Lady Marian of Leaford) had been around for centuries before she became associated with Robin Hood starting in the 1700s.

Keith Hernandez is a former professional first baseman who played Major League Baseball mainly with the St. Louis Cardinals and the New York Mets. After retiring in 1990, Hernandez became a television broadcaster for Mets games. He also appeared in three episodes of the sitcom “Seinfeld”, including the last episode, playing himself. In the show, Hernandez dated Elaine, and became the object of Jerry’s “male crush”.

The ugli fruit is a hybrid of an orange and a tangerine, first discovered growing wild in Jamaica where most ugli fruit comes from today. “UGLI” is a trademark name that is a variant of “ugly”, a nod to the fruits unsightly wrinkled rind.

Musician Pete Best is most famous as the first drummer with the Beatles. Famously, Best was sacked from the band by manager Brian Epstein. However, Epstein took this step reluctantly, and at the request of Lennon, McCartney and Harrison. Several stories have emerged about why the decision was made, but it seems that record producers at Parlophone were insisting that a session drummer be used in the band’s first recordings, and things snowballed from there. Best was soon replaced by Ringo Starr.

A power inverter is a device that converts direct current (DC) to alternating current (AC).

38. Milwaukee schoolteacher who went on to lead Israel : MEIR

Starfish (sometimes “sea stars”) come in many shapes and sizes, but commonly have “pentaradial symmetry”, meaning they have symmetric body-shapes with five points. Most starfish are predators, mainly living on a diet of mollusks such as clams and oysters.

Oculus (plural “oculi”) is the Latin word for “eye”.

Uma Thurman started her working career as a fashion model, at the age of 15. She appeared in her first movies at 17, with her most acclaimed early role being Cécile de Volanges in 1988’s “Dangerous Liaisons”. Thurman’s career really took off when she played the gangster’s “moll” in Quentin Tarantino’s “Pulp Fiction” in 1994. My favorite of all Thurman’s movies is “The Truth About Cats & Dog’s”, a less acclaimed romcom released in 1996. She took a few years off from 1998 until 2002, doing very little work in favor of motherhood. It was Tarantino who relaunched her career, giving her the lead in the “Kill Bill” films.

There is a duo of letters Z (zee) in the word “dazzling”.

38. Milwaukee schoolteacher who went on to lead Israel : MEIR

46. Suffered from neglect, in a way : RUSTED