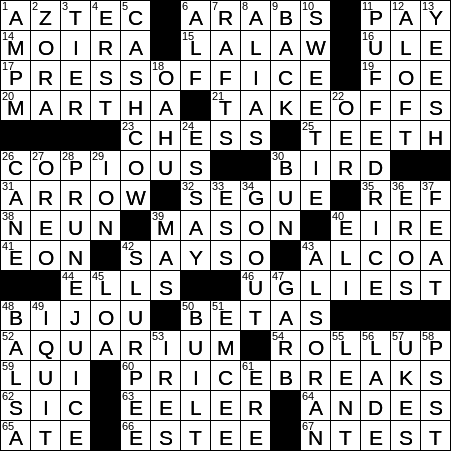 Themed answers comprise the letters “PRICE”, with a BREAK somewhere inside so that the “PRICE” string is split between the starts and ends of the answers:

Moira Shearer was a ballet dancer and actress born Scotland. Shearer’s most famous film role was in 1948’s “The Red Shoes”, in which she played the lead character, a ballet dancer called Vicky Page. She was married to the respected English journalist and broadcaster Ludovic Kennedy.

As described in Homer’s “Iliad”, Hector was a Trojan prince and a great fighter. Hector was slain during the Trojan War, as the Greeks lay siege to Troy. If we are to believe the 2004 film “Troy”, Hector actually died at the hands of Achilles, while fighting a duel. Homer’s “Iliad” is less specific about the circumstances of Hector’s death.

Achilles is a Greek mythological figure, and the main protagonist of Homer’s “Iliad”. When Achilles was born, his mother attempted to make him immortal by dipping him into the River Styx. As he was held by the heel as he was immersed, this became the only vulnerable point on his body. Years later he was killed when a poisoned arrow struck him in the heel. That arrow was shot by Paris.

“Grandmaster” is a title held for life that is awarded by the World Chess Association (FIDE). The only FIDE title higher than Grandmaster is World Champion. Despite the masculine appearance of the title, it is awarded to both men and women.

The noun “bijou” (plural “bijoux”) is used for a small expensive trinket. “Bijou” is French for “jewel”.

“Aquarium” is a Latin word meaning “pertaining to water”, although in Latin the word only existed as a noun with the meaning “drinking place for cattle”. Before the use of the term “aquarium”, a fish tank was sometimes referred to as a marine vivarium.

Conger eels can grow to be very, very large, perhaps up to 10 feet in length.

The Andes range is the longest continuous chain of mountains in the world, as it runs down the length of the west coast of South America for about 4,300 miles, from Venezuela in the north to Chile in the south. The highest peak in the Andes is Mt. Aconcagua, at an elevation of 22,841 feet. Interestingly, the peak of Mt. Chimborazo in Ecuador is the furthest point on the Earth’s surface from the center of the planet. That’s because of the equatorial “bulge” around the Earth’s “waist”.

The 12-hour clock has been around a long time, and was even used in sundial format in Ancient Egypt. Our use of AM and PM dates back to Roman times, with AM standing for Ante Meridiem (before noon) and PM standing for Post Meridiem (after noon). However, the Romans originally used the AM concept a little differently, by counting backwards from noon. So, 2AM to the Romans would be two hours before noon, or 10AM as we would call it today.

The words “o’er the land of the free” come from the US national anthem “The Star-Spangled Banner” written by Francis Scott Key.