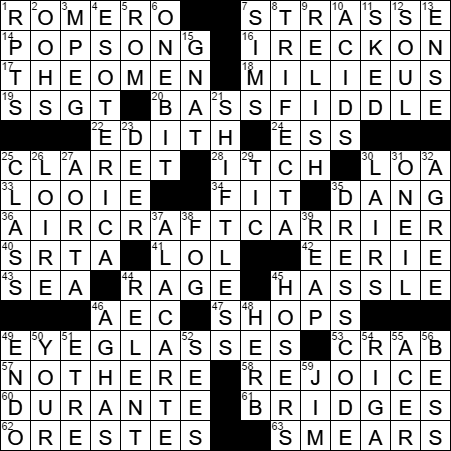 Each of today’s themed answers is something with a BRIDGE:

George A. Romero is a film director noted for making satirical horror films such as “Night of the Living Dead”, “Dawn of the Dead” and “Day of the Dead”. Ugh …

“Dawn of the Dead” is a 1978 horror movie all about zombies going after some folks barricaded into a shopping mall. I really don’t do zombies nor horror films …

In a popular song, a bridge is a connecting device, usually between verse and chorus.

“Billboard” was founded way back in 1894 as a trade magazine for the advertising and bill posting industry. The editorial focus gradually moved towards music as phonographs, radios and the recorded music business took off in the early part of the 20th century. “Billboard” published its first “music hit parade” 1936, and is now famous for its collection of lists that track music sales.

17. First of a film series about Damien Thorn : THE OMEN

We use the French term “milieu” to mean an environment, surroundings. In French, “milieu” is the word for “middle”.

The double bass is usually referred to as the bass fiddle or bass violin in the world of folk and bluegrass music.

Edith Head was a Hollywood costume designer. Head won eight Academy Awards for Best Costume Design for her work on movies including 1951’s “All About Eve”, 1954’s “Roman Holiday” and 1955’s “Sabrina”. She ended up winning more Oscars than any other woman in history, in any category.

A switchback is road that zigzags through mountainous terrain. The term “switchback” dates back to the 1860s, and originally applied to zig-zag rail tracks.

A “looie” (lieutenant) has a higher rank than a “noncom” (noncommissioned officer).

A conniption, or more commonly a conniption fit, is a bout of violent anger or panic.

Laugh out loud (“LOL” in text-speak)

The terms “goosebumps” and “goose flesh” come from the fact that skin which is cold can look like the flesh of a plucked goose.

Neptune was the Roman god of the sea and of freshwater. He was sometimes known as “Neptunus Equester” as he was also the god of horses and patron of horse-racing.

The Atomic Energy Commission (AEC) was set up right after WWII in 1946, with the aim of promoting the peaceful use of atomic energy. Establishing the AEC was a significant move made by President Truman, as it passed control of atomic energy from the military to the civilian sector. The AEC continued to operate until 1974 when its functions were divided up into two new agencies: the Energy Research and Development Administration and the Nuclear Regulatory Commission (NRC).

The Manhattan project was the joint US-Canada-UK project to develop an atomic bomb during WWII. Initially, the Army headquarters for the program was located on the 18th floor of a building on Broadway in New York City. Eventually, because of that first location, the project adopted the name “Manhattan”.

Lenscrafters is a eye-care retail chain that was founded in 1983. It is now the largest optical chain in the US. LensCrafters is owned by Italian eyewear company Luxottica.

Jimmy Durante was a very talented entertainer, with that wonderful, gravelly voice, as well as that large nose that he used in so much of his humor (and earned him the nickname “Schnozzola”). Durante appeared in the Broadway stage musical “Jumbo” in 1935. In one scene, he leads a live elephant across the stage, and gets stopped by a police officer who asks, “What are you doing with that elephant?” Durante replies “What elephant?” and brings the house down every night.

“Inka Dinka Doo” was Jimmy Durante’s theme song, a novelty piece composed by Durante in 1934. Such was his association with the song that when Durante’s charity paid for a heated therapy swimming pool in Port Arthur, Texas in 1968, it was named the “Inka Dinka Doo Pool”.

61. Hollywood family name … and what the answers to starred clues have in common : BRIDGES

The actor Lloyd Bridges is noted for his many television and movie roles over a long and distinguished career. Lloyd is also remembered as the father of two great actor sons: Beau Bridges and jeff Bridges. Lloyd served with the US Coast Guard during WWII, and was a member of the Coast Guard Auxiliary after the war. Sons Beau and Jeff also served in the Coast Guard and Coast Guard Reserve.

Orestes is a character appearing in Greek mythology, and is the subject of several Ancient Greek plays. In a story by Homer, Orestes kills his mother Clytemnestra. He does so in revenge as Clytemnestra had killed Agamemnon, who was her husband and father to Orestes. Agamemnon was killed by his wife for sacrificing his daughter Iphigenia in order to get favorable winds on a sea voyage. Heavy stuff …

The Moving Picture Experts Group (MPEG) was established in 1988 to set standards for audio and video compression. The standards they’ve come up with use the acronym MPEG.

Something described as “esoteric” is meant only for a select few with special knowledge. The term comes from the Greek “esoterikos” meaning “belonging to an inner circle”.

SimCity is a very clever computer game. Players build and grow cities and societies by creating the conditions necessary for people (the Sims) to move in and thrive. “SimCity” was launched in 1989, and to this day it is consistently ranked as one of the greatest computer games of all time.

In horse racing, a trifecta is a bet in which the first, second and third place finishers are predicted in the correct order. The same bet can be made in jai alai competitions, predicting which the top three finishers.

The city of Detroit was founded in 1701 by Antoine de la Mothe Cadillac, a French explorer. The original settlement was named for the Detroit River, which in turn takes its name from the French word “détroit” meaning “strait”. Detroit became inextricably linked with the automotive business from the very early 20th century when Henry Ford and others set up manufacturing in the area. This link to transportation led to Detroit’s nicknames of “Motor City” and “Motown”. The city’s economic strength declined at the beginning of the 21st century, resulting in a 25% drop in population between 2000 and 2010. Detroit filed for the country’s largest municipal bankruptcy in history in 2013, facing a debt of $18.8 billion. The city exited bankruptcy at the end of 2014.

Motown Records is a record label that was founded in 1959 in Detroit (aka “Motor City” or “Motown”). The founder of Motown records was Berry Gordy, Jr.

The motto of the Commonwealth of Massachusetts is “Ense petit placidam sub libertate quietem”, a Latin phrase that can be translated as “By the sword we seek peace, but peace only under liberty”. The quotation is from a passage written by English politician Algernon Sidney who was executed for treason by King Charles II.

The Loire is the longest river in France. It is so long that it drains one-fifth of the nation’s land mass. The Loire rises in the southeast, in the Cevennes mountain range, then heads north then due west, emptying into the Bay of Biscay at the city of Nantes. The Loire Valley is home to some of France’s most famous wine production, and includes the wine regions of Sancerre, Pouilly-Fumé and Muscadet.

Roger O’Neil is a news reporter who has been working for NBC for over 30 years.

On a restaurant menu, items that are “à la carte” are priced and ordered separately. A menu marked “table d’hôte” (also called “prix fixe”) is a fixed-price menu with limited choice.

The derogatory word “hoser”, meaning “foolish or uncultivated person”, is apparently attributed to Canadians. That said, I just read that the term is in fact rarely used north of the border.

You might see FYI (for your information) or Attn. (attention) at the top of a memo.

“Hidden Figures” is an excellent 2016 film based on a book of the same name by Margot Lee Shetterly. Both book and film tell the story of female African American mathematicians who worked for NASA during the Mercury and Apollo programs in the 1960s.

17. First of a film series about Damien Thorn : THE OMEN

36. *Place to land when there’s no land in sight : AIRCRAFT CARRIER

61. Hollywood family name … and what the answers to starred clues have in common : BRIDGES