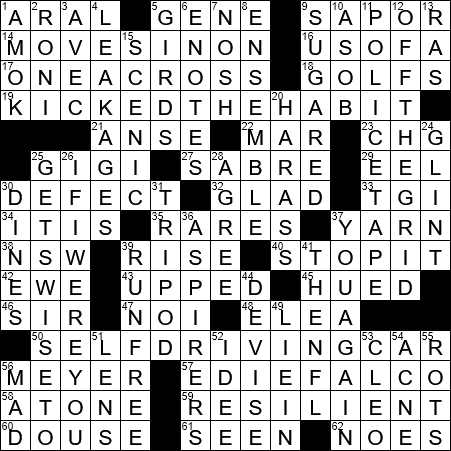 “Sapor” is another word for “flavor, a quality that can be tasted”. “Sapor” is Latin for “taste, flavor”.

Victor Hugo was a French poet and playwright who is known in his native country mainly for his poetry. However, outside of France, Hugo is perhaps more closely associated with his novels such as “Les Misérables” and “The Hunchback of Notre-Dame”.

Our acts make or mar us, we are the children of our own deeds.

In the lovely musical film “Gigi”, released in 1958, the title song is sung by Louis Jourdan who plays Gaston. My favorite number though, has to be “Thank Heaven for Little Girls” sung by Maurice Chevalier. Many say that “Gigi” is the last in the long line of great MGM musicals. It won a record 9 Academy Awards, a record that only lasted one year. Twelve months later “Ben Hur” won 11 Oscars. In the 1958 film, Gigi was played by the lovely Leslie Caron. A few years earlier, “Gigi” was a successful stage play on Broadway. Chosen for the title role on stage was the then-unknown Audrey Hepburn.

An elver is a young eel.

T.G.I. Fridays is an American restaurant chain that was founded in 1965 in New York City. Today there are over a thousand T.G.I. Friday’s restaurants in over 50 countries. I think that Fridays has always been particularly successful overseas. I used to visit one a lot with my family when we lived in the Philippines, and I believe the most successful Fridays restaurant anywhere in the world is the one in Haymarket Leicester Square in London in the UK.

Sydney is the most populous city in Australia. People from Sydney are known as “Sydneysiders”.

One might get a rise out of someone, provoke a reaction. The phrase “get a rise out of” comes from the world of angling. A fisherman might drop a fly on the water’s surface in the hope that a fish will rise to the bait.

Dolly is the most famous sheep in the world. She was a clone, and was born in 1996 near Edinburgh in Scotland, grown from a cell taken from the mammary gland of a healthy donor sheep. When asked why she was called Dolly, the scientist responsible said, and I quote:

“Dolly is derived from a mammary gland cell and we couldn’t think of a more impressive pair of glands than Dolly Parton’s”.

Noël Coward was the most flamboyant of personalities. A playwright, composer and actor, Coward worked in a remarkable range of genres. He wrote the wonderfully airy play “Blithe Spirit”, as well as the Oscar-winning WWII naval drama “In Which We Serve”. A couple of his more famous songs, many of which he performed himself in cabaret, are “Mad Dogs and Englishmen” and “London Pride”.

The author Stephenie Meyer is best-known for her “Twilight” series of vampire romance novels. The “Twilight” books are aimed at young adults. Meyer also wrote a 2008 adult sci-fi novel called “The Host”, which went straight to the top of the New York Times Best Seller list.

Noodle Roni was a derivative product of Rice-A-Roni that was based on the classic recipe of Noodles Alfredo. Noodle Roni was renamed to Pasta Roni in 1995. Never tried it …

“Avec plaisir!” is French for “with pleasure!”.

The phrase “gird your loins” dates back to Ancient Rome. The expression describes the action of lifting “one’s skirts” and tying them between the legs to allow more freedom of movement before going into battle. Nowadays, “gird your loins” (or sometimes just “gird yourself”) is a metaphor for “prepare yourself for the worst”.

Something is said “to tide one over” if it (often money) will see one through a rough patch. The idea behind the expression is that a swelling tide can carry you over an obstacle without effort on your part, as perhaps a reserve fund might keep the lenders from your door. The use of “tide” in this sense might come from some famous lines spoken by Brutus in “Julius Caesar” by William Shakespeare

In the most general sense, an ensemble is a group producing a single, harmonious effect. For example, a musical ensemble works together to perform a particular work, with no instrument really dominating the piece. An ensemble cast works on a movie, with the main actors sharing the spotlight relatively equally. An ensemble can also be a complete outfit of clothing and accessories that all work together to provide a harmonized look.

Roger Goodell became Commissioner of the NFL in 2006. Goodell is married to Jane Skinner, a former daytime news anchor with Fox News.

49. Protest where people do and don’t take a stand? : LIE-IN

A die-in (also “lie-in”) is a protest in which those demonstrating lie on the ground and pretend to be dead. One of the more famous die-ins was held in Washington D.C. in 2007 to protest the Iraq War. There were several thousand protesters, almost two hundred of whom were arrested, including ten veterans of the Iraq War.

Disney’s “Pinocchio” was the studio’s second animated feature film, and was released three years after the hugely successful 1937 movie “Snow White and the Seven Dwarfs”. “Pinocchio” is based the 1883 children’s novel “The Adventures of Pinocchio” by Italian author Carlo Collodi. It had the honor of becoming the first animated feature to win a competitive Oscar, winning for Best Original Score and Best Original Song (“When You Wish Upon a Star”).

Mad money is money that one sets aside for an unlikely contingency, or perhaps an impulse purchase. The term “mad money” originated in the 1920s, and back then applied to money that a woman would carry on a date in case her escort hadn’t the decency to drive her home. Times have changed …