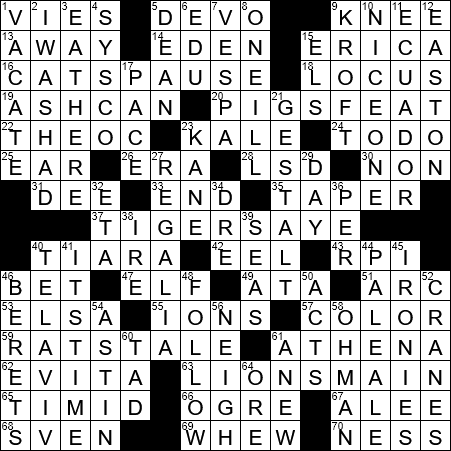 Themed answers sound like common phrases that refer to the parts of specific animals. And, the beasts referenced in the clues are all cartoon animals:

Erica Hahn is a character in the TV medical drama “Grey’s Anatomy” who is played by actress Brooke Smith. Smith also appeared in the movie “The Silence of the Lambs” playing Catherine Martin, the young woman who was abducted and trapped in a dry well.

The term “cat’s-paw” has several meanings. The one I am most familiar with is small ripple on a surface of water caused by a light wind.

Porky Pig was the first of the characters created by Warner Bros. to become a hit with audiences. Porky Pig is the guy with the line at the end of each cartoon, “Th-th-th-that’s all folks!” If you don’t mind a little adult language, there’s a very funny 11-second Porky Pig clip that the studio released on a blooper reel in 1938. Porky Pig stutters out “Son of g-g-gun”, only he doesn’t say “gun” …

“The O.C.” is a teen drama that aired for four seasons on Fox finishing up in 2007. I never watched it, but I understand that it is set in Newport Beach in Southern California.

Tinnitus is a ringing sound in the ears when there is actually no sound present. The term derives from the Latin verb “tinnire” meaning “to ring”.

Tony the Tiger has been the mascot of Frosted Flakes cereal since the product’s introduction in 1951. As Tony would say, “They’re Gr-r-reat!” Well, I thought they were when I was a lot younger …

Tiger’s eye is a reddish-gold colored gemstone made mainly from quartz that is colored by iron oxide.

57. One of Crayola’s hundreds : COLOR

In the year 2000, the Crayola company held the “Crayola Color Census 2000”, in which people were polled and asked for their favorite Crayola colors. President George W. Bush chose “Blue Bell” and Tiger Woods chose “Wild Strawberry”.

A rat’s tail is a hair style with a tail-like, thin tuft of hair growing down the back of the neck.

“Don’t Cry For Me Argentina” is a hit song that came out of the 1976 concept album “Evita” by Andrew Lloyd Webber and Tim Rice. Recorded by English singer Julie Covington, it is sung by the character Eva Perón on the album and in the subsequent stage musical. Covington opted out from appearing in the musical, and so the role of Eva went to Elaine Paige.

“Lion’s mane” is a common name for the edible mushroom Hericium erinaceus. The common name arises from the mushroom appearance as it grows in clumps of dangling spines that might resemble the mane of a lion.

“Sven” is a Scandinavian name. “Sven” is derived from the Old Norse word for “young man” or “young warrior”.

An Internet address (like NYTCrossword.com and LAXCrossword.com) is more correctly called a Uniform Resource Locators (URL).

Vespa is a brand of motor scooter that was originally made in Italy (and now all over the world) by Piaggio. “Vespa” is Italian for “wasp”.

The playwright Eugene O’Neill was born in a New York City hotel room in what is now called Times Square, in 1888. That building no longer exists and there is a Starbucks on the site today, but you can go take a look at the commemorative plaque at the Northeast corner of 43rd and Broadway. O’Neill died in 1953, in room 401 of the Sheraton Hotel on Bay State Road in Boston. His last words were, “I knew it. I knew it. Born in a hotel room, and God damn it, died in a hotel room.” Eugene O’Neill won a Pulitzer for his play “Anna Christie”.

Journalist Steve Kroft has been a correspondent on the excellent CBS newsmagazine show “60 Minutes” since 1989.

“Gestalt” is a German word meaning “shape”. The principles of gestaltism were developed in Germany in the early 1900s. One of the main tenets is that “the whole is greater than the sum of the parts”.

We have seven days in a week because there are seven classical planets in the Solar System. The days were named for these “planets” during the Roman era:

The US Army Special Forces are known as the Green Berets because they wear … green berets. The Green Beret is also worn by the Royal Marines of the British Army. When US Army Rangers and OSS operatives were trained by the Royal Marines in Scotland during WWII, graduates of the gruelling training program were awarded green berets by their British instructors. The US soldiers, although proud of their new headgear, were not allowed to wear it as part of their uniform. They had to wait until 1961, when President Kennedy authorized the green beret for exclusive use by US Special Forces.